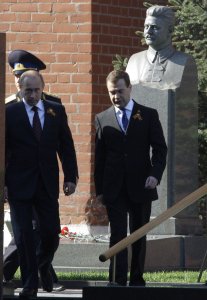 U.S. News // 3 weeks ago
NYC gallery exhibits work of female artists who fled war in Ukraine
Dozens of artworks made by women who fled Ukraine since the Russian invasion in February are being exhibited at the Fridman Gallery in New York City.

Top News // 1 year ago
The Almanac
On Feb. 11, 2016, the last four remaining armed occupiers at the Malheur National Wildlife Refuge in Oregon surrendered after a 41-day standoff.

Top News // 1 year ago
The Almanac
On Dec. 1, 1959, the United States and the Soviet Union signed a treaty banning military activity on Antarctica.

World News // 2 years ago
British archives release WWII records to commemorate 75th 'VE Day'
The new digitalized documents include British government records that detail how London received and reacted to news of Germany's surrender -- and concern that one of the Allies might jump the gun.

Top News // 2 years ago
The Almanac
On May 6, 1940, "The Grapes of Wrath" by John Steinbeck was awarded the Pulitzer Prize for fiction.

World News // 2 years ago
Russian lawmakers favor reforms that would give Putin 2 more terms
Russian lawmakers voted Wednesday to approve a suite of constitutional amendments that will allow President Vladimir Putin to stay in power for another 16 years.

A single death is a tragedy; a million deaths is a statistic

I want a new invincible human being, insensitive to pain, resistant and indifferent about the quality of food they eat

I want a new invincible human being, insensitive to pain, resistant and indifferent about the quality of food they eat

Joseph Vissarionovich Stalin (18 December 1878 – 5 March 1953) was the first General Secretary of the Communist Party of the Soviet Union's Central Committee from 1922 until his death in 1953. While formally the office of the General Secretary was elective and was not initially regarded as top position in the Soviet state, after Vladimir Lenin's death in 1924, Stalin managed to consolidate more and more power in his hands, gradually putting down all opposition groups within the party. This included Leon Trotsky, the Red Army organizer, proponent of world revolution, and principal critic of Stalin among the early Soviet leaders, who was exiled from the Soviet Union in 1929. Instead, Stalin's idea of socialism in one country became the primary line of the Soviet politics.

In 1928, Stalin replaced the New Economic Policy of the 1920s with a highly centralised command economy and Five-Year Plans, launching a period of rapid industrialization and economic collectivization in the countryside. As a result, the USSR was transformed from a largely agrarian society into a great industrial power, and the basis was provided for its emergence as world's second largest economy after World War II. However, during this period of rapid economical and social changes, millions of people were sent to penal labor camps, including many political convicts, and millions were deported and exiled to remote areas of the Soviet Union. The initial upheaval in the changing agricultural sector disrupted food production in the early 1930s, contributing to the catastrophic Soviet famine of 1932–1933, one of the last major famines in Russia. In 1937–38, a campaign against former members of the communist opposition, potential rivals in the party, and other alleged enemies of the regime culminated in the Great Purge, a period of mass repression in which hundreds of thousands of people were executed, including Red Army leaders convicted in coup d'état plots.

FULL ARTICLE AT WIKIPEDIA.ORG
This article is licensed under the GNU Free Documentation License.
It uses material from the Wikipedia article "Josef Stalin."