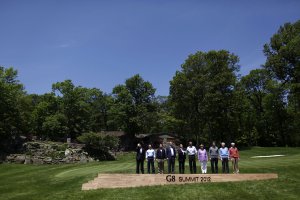 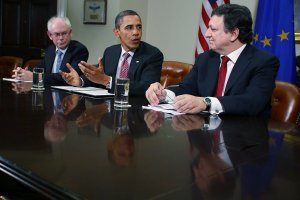 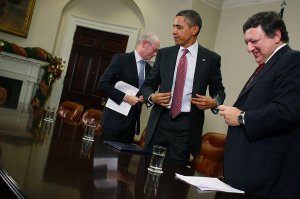 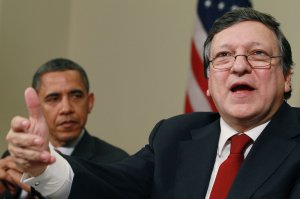 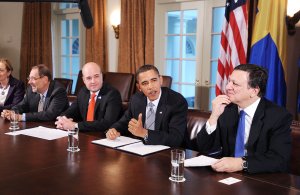 This is not just another treaty, it is a transformational agenda

I think the decisions taken now are extremely important because they are of systemic nature. Not only there was -- the question of addressing the sustainability of the big net, lowering the interest rate, extending the maturities

We are now implementing the new system of European governance

Economic Outlook: Price of solidarity May 24, 2011

This is not about dictating policy. ... National governments retain responsibility for economic policies implemented in member states

José Manuel Durão Barroso (Portuguese pronunciation: ; born 23 March 1956) is a Portuguese politician. He is President of the European Commission, since 23 November 2004. He served as Prime Minister of Portugal from 6 April 2002 to 17 July 2004.

Durão Barroso (as he is known in Portugal) graduated in Law from the Faculty of Law of the University of Lisbon and has an MSc in Economic and Social Sciences from the University of Geneva (Institut Européen de l'Université de Genève) in Switzerland. His academic career continued as an Assistant Professor in the Faculty of Law of the University of Lisbon. He did research for a PhD at Georgetown University and Georgetown's Edmund A. Walsh School of Foreign Service in Washington, D.C. but his CV does not list any doctoral degree (except honorary). He is a 1998 graduate of the Georgetown Leadership Seminar. Back in Lisbon, Barroso became Director of the Department for International Relations at Lusíada University (Universidade Lusíada). He received honorary degrees from many Universities listed under honorary degrees.

Barroso's political activity began in his college days, before the Carnation Revolution of 25 April 1974. He was one of the leaders of the underground Maoist MRPP (Reorganising Movement of the Proletariat Party, later PCTP/MRPP, Communist Party of the Portuguese Workers/Revolutionary Movement of the Portuguese Proletariat). In an interview with the newspaper Expresso, he said that he had joined MRPP to fight the only other student body movement, also underground, which was controlled by the Communist Party. Despite this justification there is a very famous political 1976 interview recorded by RTP in which he criticises the bourgeois education system which "throws students against workers and workers against students", showing clear left-wing and Maoist inclinations. In December 1980, Barroso joined the right-of-centre PPD (Democratic Popular Party, later PPD/PSD-Social Democratic Party), where he remains to the present day.

FULL ARTICLE AT WIKIPEDIA.ORG
This article is licensed under the GNU Free Documentation License.
It uses material from the Wikipedia article "Jose Manuel Barroso."