MLB // 3 years ago
Dodgers' Rich Hill is urinating on his hand to heal blisters -- again
Los Angeles Dodgers pitcher Rich Hill urinated on his middle finger to help solve a blister issue, but this isn't the first time he chose a urinary solution.

Sports News // 4 years ago
MLB notebook: Former New York Yankees GM Stick Michael dies
Gene "Stick" Michael, the New York Yankees executive who was the architect of the team's late-1990s dynasty, has died of a heart attack. He was 79. 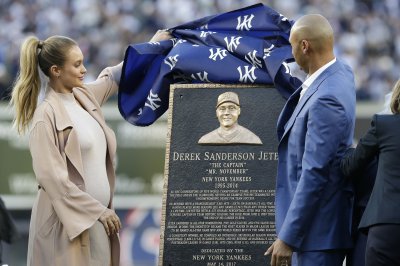 MLB // 4 years ago
Looming purchase of Miami Marlins may change perception of Derek Jeter
NEW YORK -- Steeped in history, legendary ballplayers and championships, the New York Yankees really have it down when it comes to pomp.

MLB // 5 years ago
Opinion: MLB roster expansion needs to be contracted
The way baseball is played changes on Thursday as rosters are permitted to expand from 25 to as many as 40. It is a rule that must be revised.

Posada out five weeks with shoulder injury May 03, 2008

Jorge Posada (born August 17, 1971) is a Major League Baseball player with the New York Yankees, the only Major League team he has played for. He served as the Yankees primary catcher for most of his career, though following off-season knee surgery, he was moved to designated hitter for the 2011 season. He is a switch hitter, and has been on five All-Star teams over his 16-year career.

He is the only Major League catcher to ever have hit .330 or better with 40 doubles, 20 home runs, and 90 RBIs in a single season. Posada and Yogi Berra are the only Yankees catchers to hit 30 home runs in a season. Since 2000, Posada has had more runs batted in, home runs, and hits than any other catcher in baseball. Posada is one of the "Core Four" Yankees.

Posada was born in Santurce, Puerto Rico to a Cuban father and a Dominican mother, and attended the Alejandrino High School in San Juan, where he participated in basketball, volleyball, track, and baseball. As a baseball player in high school, he was named an All-Star player at shortstop in the 1988-89 season.

FULL ARTICLE AT WIKIPEDIA.ORG
This article is licensed under the GNU Free Documentation License.
It uses material from the Wikipedia article "Jorge Posada."
Back to Article
/