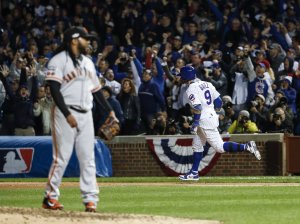 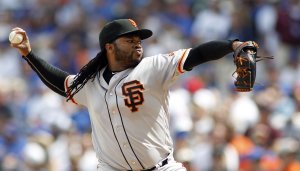 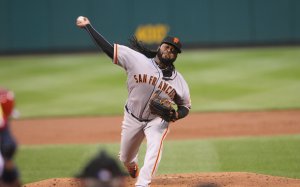 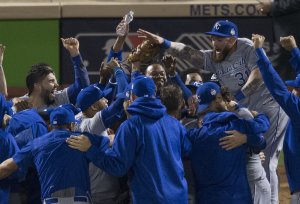 MLB // 10 months ago
Enrique Hernandez leads Dodgers past Giants
Clayton Kershaw was scratched from his start and Cody Bellinger and Mookie Betts combined for just two hits, but Enrique Hernandez provided plenty of spark to lead the Los Angeles Dodgers over the San Francisco Giants.

MLB // 2 years ago
Johnny Cueto announces death of horse 'Popeye' with Instagram photo
San Francisco Giants pitcher Johnny Cueto memorialized his horse Popeye by posting a photo of the animal on Instagram, after it died.

MLB // 2 years ago
Rockies try to continue mastery of Giants
DENVER -- The Colorado Rockies will try to sweep the San Francisco Giants and add to their misery at Coors Field when the clubs finish a three-game series Wedneday. 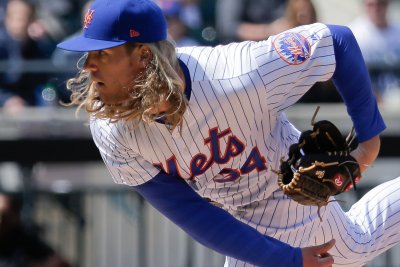 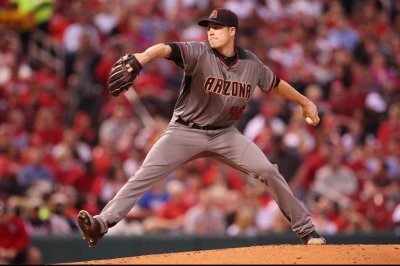 MLB // 2 years ago
Diamondbacks try to get it right vs. Giants
PHOENIX -- Arizona and San Francisco will play final third of the season without a key offensive component. One loss was expected. The other came as a surprise.

MLB // 2 years ago
Giants hope for healthier Posey vs. A's
OAKLAND, Calif. -- The San Francisco Giants get an opportunity to ease what they hope will be a healthier Buster Posey back into the lineup as a designated hitter when they continue a six-game series against the Oakland Athletics on the American League side of the San Francisco Bay on Friday night.

MLB // 2 years ago
Cueto, Giants take aim at Cubs
SAN FRANCISCO -- Johnny Cueto is scheduled to make his second start since returning from a two-month absence but could find himself throwing to a substitute batterymate when the San Francisco Giants and Chicago Cubs continue their three-game series on Tuesday night.

Cueto was in the Minor Leagues for three seasons, and has excelled at many levels, but really turned heads during the 2007 season. Cueto started his career for the Gulf Coast Reds of the Rookie Gulf Coast League, posting a 5.02 ERA, before being promoted to the High-A Sarasota Reds of the Florida State League, where he finished his 2005 season. Johnny has had progressively better seasons since. In 2006, Cueto was placed in Low A Dayton, blasting out of the gates, and posting a 2.61 ERA, and a 0.88 WHIP. While with Dayton, on May 13, 2006, he threw a rain shortened no-hitter against Wisconsin. He was later promoted back to Sarasota, where he finished his season for the second consecutive year. Poised for a breakout 2007, Cueto was placed, once again, in Sarasota. He pitched 14 games in Sarasota, before going on a hot streak, and advancing through three levels in one season. He burnt through AA Chattanooga, and AAA Louisville throughout the rest of his 2007 campaign. He was named the Reds' Minor League Pitcher of the Year for the second consecutive season.

Cueto made his Major League debut on April 3, 2008 for the Reds at home against the Arizona Diamondbacks, where he carried a perfect game through five innings before surrendering a home run to Justin Upton in the top of the sixth inning. The home run was the only baserunner he allowed, striking out 10 in 7 innings. Cueto was credited with the win in his debut, as the Reds hung on to win 3-2. Cueto was the first Red since 1900 to throw ten strikeouts in his Major League debut. He was also the first MLB pitcher to have 10 strikeouts and 0 walks in his debut. He was the third in MLB history to have 10 strikeouts and give up only 1 hit. For the game, Cueto's ERA was 1.29 on 92 pitches. Despite his impressive debut, Cueto was inconsistent for the most part on the season. At the end of the 2008 campaign, he finished with a 9-14 record with an ERA of 4.81.

FULL ARTICLE AT WIKIPEDIA.ORG
This article is licensed under the GNU Free Documentation License.
It uses material from the Wikipedia article "Johnny Cueto."
Back to Article
/