Top News // 1 year ago
The Almanac
On Dec. 9, 2014, a Senate Intelligence Committee report said the CIA's interrogation of terror suspects was more brutal than it told the White House or public. 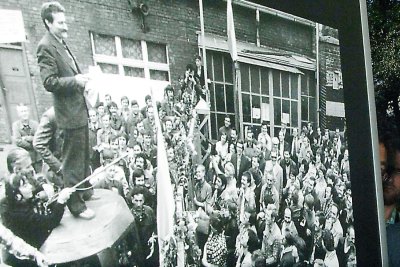 People ask you what you've been doing for the last few years, and when you say you're doing stick balancing, this look comes over their eyes

The noise pushes balancing to the boundary between stability and instability

John Milton (9 December 1608 – 8 November 1674) was an English poet, polemicist, and civil servant for the Commonwealth of England. He is best known for his epic poem Paradise Lost,Paradise Regained and Samson Agonistes. He was a scholarly man of letters, a polemical writer, and an official serving under Oliver Cromwell. He wrote at a time of religious flux and political upheaval in England, and his poetry and prose reflect deep convictions and deal with contemporary issues, such as his treatise condemning licensing, Areopagitica. As well as English, he wrote in Latin and Italian, and had an international reputation during his lifetime. After his death, Milton's critical reception oscillated, a state of affairs that continued through the centuries. At an early stage he became the subject of partisan biographies, such as that of John Toland from the nonconformist perspective, and a hostile account by Anthony à Wood. Samuel Johnson wrote unfavourably of his politics as those of "an acrimonious and surly republican"; but praised Paradise Lost "a poem which, considered with respect to design may claim the first place, and with respect to performance, the second, among the productions of the human mind". William Hayley's 1796 biography called him the "greatest English author". He remains generally regarded "as one of the preeminent writers in the English language and as a thinker of world importance."

The phases of Milton's life parallel the major historical and political divisions in Stuart Britain. Under the increasingly personal rule of Charles I and its breakdown in constitutional confusion and war, Milton studied, travelled, wrote poetry mostly for private circulation, and launched a career as pamphleteer and publicist. Under the Commonwealth of England, from being thought dangerously radical and even heretical, the shift in accepted attitudes in government placed him in public office, and he even acted as an official spokesman in certain of his publications. The Restoration of 1660 deprived Milton, now completely blind, of his public platform, but this period saw him complete most of his major works of poetry. Milton had a great impact on the Romantic movement in England, as shown in fellow poet William Wordsworth's sonnet London, 1802. Wordsworth calls upon him to rise from the dead and aid in returning England to its former glory.

Milton's views developed from his very extensive reading, as well as travel and experience, from his student days of the 1620s to the English Revolution. By the time of his death in 1674, Milton was impoverished and on the margins of English intellectual life, yet unrepentant for his political choices, and of Europe-wide fame.

FULL ARTICLE AT WIKIPEDIA.ORG
This article is licensed under the GNU Free Documentation License.
It uses material from the Wikipedia article "John Milton."
Back to Article
/