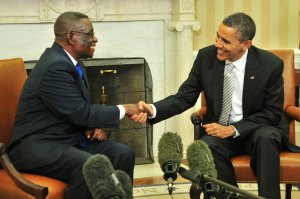 U.S. News // 1 year ago
George Floyd protests: D.C. expects major rally; Buffalo officers suspended
Multiple demonstrations are planned in Washington, D.C., and throughout the U.S. this weekend as the movement against police brutality in the wake of George Floyd's death nears its third week.

U.S. News // 2 years ago
Florida city votes to pay $600K ransom after latest cyberattack
Hackers have targeted another city with another ransomware cyberattack -- this time in South Florida, where officials have agreed to pay $600,000 to avoid problems that have crippled Baltimore for weeks.
Odd News // 1 decade ago
Landlord sends not-so-merry cards
Some residents in Britain say they're upset by holiday cards sent by their housing association to remind them to pay rent on time.
Top News // 1 decade ago
Georgia's McKinney routed in run-off
Controversial U.S. Rep. Cynthia McKinney, D-Ga., has lost in a Democratic primary run-off, with analysts predicting the end of her political career.
Science News // 1 decade ago
Survey looks at religious 'sectarianism'
A study finds U.S. "religious right" groups have negative attitudes toward similar religious groups on the right, making coalition forming more difficult.
Top News // 1 decade ago
Briton sentenced for car phone-related death
Alan Milbanke, the first Briton charged with causing death by dangerous driving while talking on a cell phone, has been sentenced to three years in prison.
Top News // 1 decade ago
Bush names three new U.S. envoys
The selection of new U.S. ambassadors to Thailand, Armenia and the Bahamas was announced by the White House Thursday.
Entertainment News // 1 decade ago
Kerry seeks wins in Hawaii, Utah, Idaho
Sen. John Kerry is seeking to maintain his momentum for "Super-Tuesday' by sweeping next week's contests in Hawaii, Utah and Idaho.
Entertainment News // 1 decade ago
Bush econ team takes to road
The administration's economic team will head to the Pacific Northwest next week to beat the drum for the president's economic agenda, the White House said.

At the time of the collision, Milbanke was in control of the vehicle, no doubt with one hand on the steering wheel and the other on the mobile phone

Evans was elected lieutenant governor in 1974. He became governor in January 1977 when Cecil D. Andrus accepted an appointment to become the Secretary of the Interior in the Carter administration.

FULL ARTICLE AT WIKIPEDIA.ORG
This article is licensed under the GNU Free Documentation License.
It uses material from the Wikipedia article "John Evans."