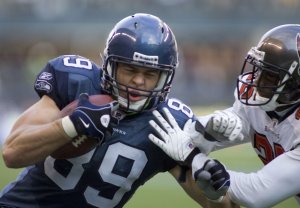 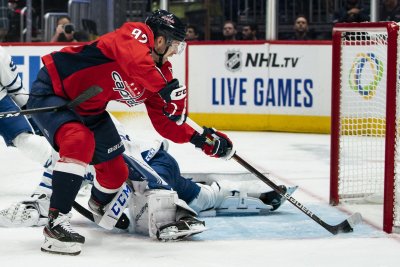 NHL // 1 year ago
Kuznetsov, Carlson spark Capitals comeback win over Maple Leafs
Evgeny Kuznetsov and John Carlson led the Washington Capitals to a comeback victory against the Toronto Maple Leafs after trailing 2-0 in the first period. 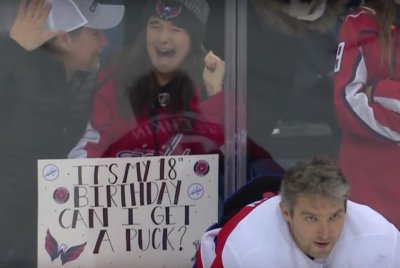 NHL // 2 years ago
Caps fan sobs joyous tears after getting puck from Alex Ovechkin
A Washington Capitals fan was overwhelmed with tears of joy after she received a puck from superstar Alex Ovechkin.

NHL // 2 years ago
Sabres will try to cool off Capitals' red-hot Alex Ovechkin
The Buffalo Sabres will try and do what the Detroit Red Wings and Carolina Hurricanes did not do this week when they play the Washington Capitals. 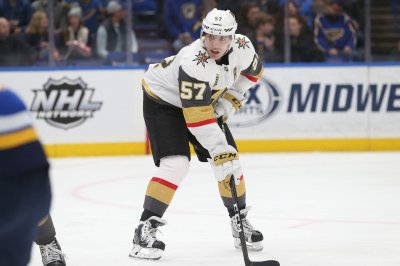 NHL // 2 years ago
Stanley Cup Finals: Golden Knights look to tie series with Capitals
The Vegas Golden Knights' storybook inaugural season is teetering on the brink. Given all they have accomplished thus far, they see no reason to panic.

NHL // 2 years ago
Knights hoping for more control in Game 2 vs. Capitals
Vegas Golden Knights goalie Marc-Andre Fleury was asked after practice if he expected Game 2 on Wednesday night at T-Mobile Arena to be a more boring game.

Maybe you're watching Alan Greenspan on C-SPAN, and you can take that video, record yourself making comments on what he is saying, and send it out over the network

Gerry was getting ready for school and was going to take a shower. He took his class ring off and he dropped it and had just flushed the toilet so it went down (with) the stool

Gerry was getting ready for school and was going to take a shower. He took his class ring off and he dropped it and had just flushed the toilet so it went down (with) the stool

John David "Catch" Carlson, Jr. (born May 12, 1984, in St. Cloud, Minnesota, U.S.) is an American football tight end for the Seattle Seahawks of the National Football League. He was drafted by the Seahawks in the second round of the 2008 NFL Draft. He played college football at Notre Dame.

He was born in St. Cloud, Minnesota, however his family moved to Litchfield right after his birth. Carlson graduated from Litchfield High School which competes in the Wright County Conference. As a football player, he was all-state Minnesota in his Senior year. He played in the 2003 U.S. Army All-American Bowl alongside fellow Notre Dame Fighting Irish players Brady Quinn, Ryan Harris, and Tom Zbikowski. As a basketball player, Carlson was voted to the preseason McDonald's All-American list. During his senior year, John Carlson managed to shatter three backboards. Carlson was also an all-state tennis player. His dad is also the basketball and tennis coach for the Litchfield Dragons.

Carlson played college football at Notre Dame, where he was a two-year starter at tight end. He was named captain in his junior and senior seasons. He recorded 100 receptions, 1,093 receiving yards and 8 total touchdowns in his career. He also lived in St. Edward's Hall, the oldest residence hall on campus.

FULL ARTICLE AT WIKIPEDIA.ORG
This article is licensed under the GNU Free Documentation License.
It uses material from the Wikipedia article "John Carlson."
Back to Article
/