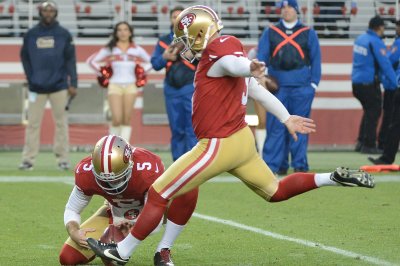 The dream that I had wasn't exactly what took place on the field, but it ended right

I would have liked it closer, but it was a great gesture from him (Fisher) to have the confidence to keep it right there and let me kick it

Playing in a dome is a beautiful thing, no wind or field conditions or anything like that

Nedney played college football at San Jose State University, where he was a four year letterman. He graduated as the school's all-time leading scorer with 236 points, going 39-for-70 in field goal attempts (including a school record 62-yarder) and 119-of-132 extra points. He also punted as a senior, averaging 37.8 yards per punt on 70 punts.

Nedney started his NFL career in 1995, bouncing around practice squads for the Green Bay Packers, Oakland Raiders, and Miami Dolphins. He then joined the Dolphins full-time for the 1996 NFL season, and led the team in scoring with 89 points. The following season, he signed with the Arizona Cardinals, who he stayed with for two and a half seasons, and at one point sharing kicking duties with veteran Chris Jacke. In 1999, he was waived by the Cardinals, and then picked up by the Raiders, where he finished the season before being released. He was picked up by the Denver Broncos at the start of the 2000 NFL season to fill in for the injured Jason Elam, but was waived after three games and then signed by the Carolina Panthers. Nedney went on to join the Tennessee Titans the following year, and was their kicker for four years, until injuring his hamstring during the 2004 NFL season. He signed with the 49ers in March 2005, and is currently the starting kicker.

FULL ARTICLE AT WIKIPEDIA.ORG
This article is licensed under the GNU Free Documentation License.
It uses material from the Wikipedia article "Joe Nedney."
Back to Article
/