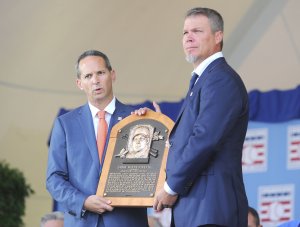 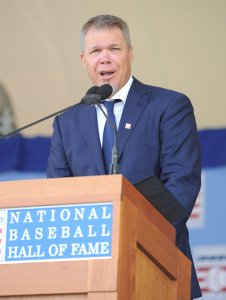 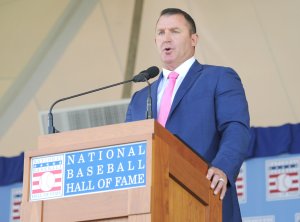 MLB // 4 years ago
Albert Pujols hits grand slam for No. 600
ANAHEIM, Calif.-- Since his start in 2001, Albert Pujoles has been a metronome of production, making numbers such as 30 home runs, 120 RBI and a .330 average seem like an every day, or every year, occurrence.

MLB // 4 years ago
Michael Brantley hits walk-off double as Cleveland Indians edge Chicago White Sox in 10
CLEVELAND -- Michael Brantley missed most of the 2016 season, but the Cleveland outfielder made a heroic return to the lineup Tuesday in the Indians' home opener.

MLB // 4 years ago
Joey Votto, Brandon Finnegan lead Cincinnati Reds past Philadelphia Phillies
CINCINNATI -- Brandon Finnegan's success this season hinges on being more pitch-efficient and throwing first-pitch strikes allowing him to pitch deeper into games. After a 25-pitch first inning on Wednesday night, Finnegan rolled through the next six frames, had 13 first-pitch strikes and delivered one of the finest outings of his young career.

MLB // 4 years ago
Public 2018 Hall ballots should benefit Barry Bonds, Roger Clemens
If you love baseball and care about the Hall of Fame, it is time to familiarize yourself with a principle called "The Observer Effect."

MLB // 4 years ago
Denied the first pitch, Sheen's Ricky Vaughn may be at Game 7 for Indians-Cubs
Watch out! Ricky "The Wild Thing" Vaughn might be at Progressive Field in Cleveland on Wednesday night for the decisive Game 7, according to his Twitter page.

Sports News // 4 years ago
Mike Napoli's blast gives Cleveland Indians victory over Minnesota Twins
MINNEAPOLIS -- When the ball left his bat, all Mike Napoli did is put his head down and circle the bases -- because no one had to tell him where it landed.

I really don't think it's a cramp, a cramp usually goes away

I wanted to jump on him, but I had to wait until the ball was caught in center

In the postseason, you never know how it's going to be day-to-day

James Howard "Jim" Thome ( /ˈtoʊmeɪ/; born August 27, 1970 in Peoria, Illinois) is an American Major League Baseball player. He is currently a designated hitter for the Cleveland Indians. He is the eighth player to hit 600 home runs in the major leagues.

Thome was originally drafted by the Cleveland Indians in the 13th round of the 1989 Major League Baseball Draft. While in the minors, he got into a fight with future Major League star Chipper Jones. Thome and Jones would later become good friends. Thome made his Major League debut on September 4, 1991 as a third baseman against the Minnesota Twins. He was 2 for 4 in that game, with his first hit coming off pitcher Tom Edens in the fourth inning. He hit his first career home run on October 4 against New York Yankees pitcher Steve Farr.

Originally a third baseman, he was shifted to first base when the Indians traded for Matt Williams in 1997.

FULL ARTICLE AT WIKIPEDIA.ORG
This article is licensed under the GNU Free Documentation License.
It uses material from the Wikipedia article "Jim Thome."
Back to Article
/