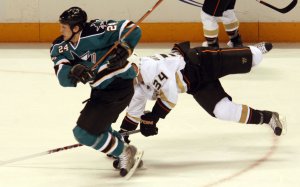 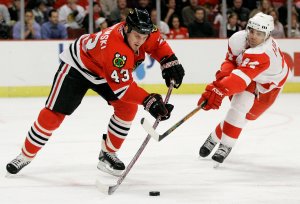 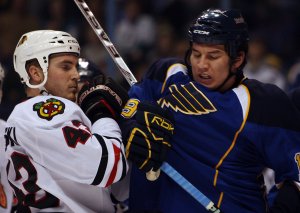 Wisniewski started his junior hockey career with his hometown Plymouth Whalers of the OHL, in 2000. He improved every year significantly, and was drafted in the 5th round by the Blackhawks in 2002. At the start of the 2003–04 season, he was named captain of the Whalers. Wielding a child in his arms and an incredible desire to win, his rocket slap-shot (good for 17 goals, 11 on the power-play), "Wiz" arguably has one of the best defensive shots in the NHL. He finished 24th in overall scoring with 70 points, but 3rd among defenseman, short 6 points of Kingston Frontenacs defenseman Bryan Rodney. However, Wisniewski played in 17 fewer games, playing in only 50 to Rodney's 67 (in a 68 game season). For his work, Wisniewski was awarded the OHL's 2004 Max Kaminsky Trophy as most outstanding defenceman. The accolades didn't stop there, as Wisniewski also took home the parent league, CHL's Defenseman of the Year award. This recognition gained Wisniewski a contract with Chicago, and a jump to the AHL's Norfolk Admirals.

Wisniewski was called up early to the Blackhawks in the 2006–07 season and stuck with the Blackhawks. James tore his ACL during the 1st period against Los Angeles on March 5, 2007. He was placed on injured reserve and missed the rest of the season.

FULL ARTICLE AT WIKIPEDIA.ORG
This article is licensed under the GNU Free Documentation License.
It uses material from the Wikipedia article "James Wisniewski."