Music // 1 year ago
Roger Waters to launch 'This is Not a Drill' tour in July
Pink Floyd bassist Roger Waters will perform across North America on a new tour in the summer.

Top News // 4 years ago
The Almanac
On June 17, 1972, the Watergate scandal began with the arrest of five burglars inside Democratic National Committee headquarters at the Watergate.

Top News // 5 years ago
The Almanac
On June 17, 1967, China announced it had successfully tested a hydrogen bomb. 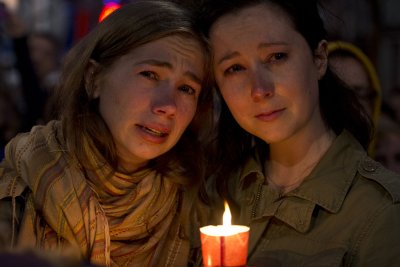 U.S. News // 5 years ago
World reacts to Orlando shootings with vigils, support
Quickly-organized vigils honoring the victims of the Orlando, Fla., shootings were held around the world Sunday.

He is widely acknowledged as one of the most important and influential composers of 20th century music. He was a quintessentially cosmopolitan Russian who was named by Time magazine as one of the 100 most influential people of the century. He became a naturalized French citizen in 1934 and a naturalized US citizen in 1945. In addition to the recognition he received for his compositions, he also achieved fame as a pianist and a conductor, often at the premieres of his works.

Stravinsky's compositional career was notable for its stylistic diversity. He first achieved international fame with three ballets commissioned by the impresario Sergei Diaghilev and performed by Diaghilev's Ballets Russes (Russian Ballets): The Firebird (1910), Petrushka (1911/1947), and The Rite of Spring (1913). The Rite, whose premiere provoked a riot, transformed the way in which subsequent composers thought about rhythmic structure, and was largely responsible for Stravinsky's enduring reputation as a musical revolutionary, pushing the boundaries of musical design.

FULL ARTICLE AT WIKIPEDIA.ORG
This article is licensed under the GNU Free Documentation License.
It uses material from the Wikipedia article "Igor Stravinsky."
Back to Article
/