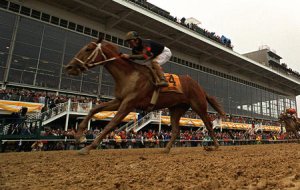 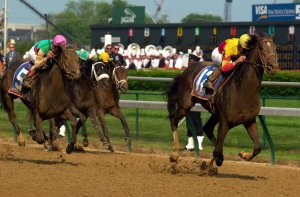 Horse Racing // 4 years ago
UPI horse racing roundup
Claiming Crown races provide a spotlight for the blue-collar horses while 2-year-olds continue their progress toward the Derby and Oaks; graded stakes in Japan and South Africa.

Fusaichi Pegasus (Japanese pronunciation: ) (foaled April 12, 1997) was purchased as a yearling for $4 million by Fusao Sekiguchi. His name is a combination of his owner's name, "Fusao," and the Japanese word for one, "ichi," to mean #1 or the best. The second half is the winged horse of Greek mythology. Fusaichi Pegasus won the Kentucky Derby in 2000. This thoroughbred's time was 2:01.12 around the 1 1/4 mile track. He was the first favorite to win the Kentucky Derby since Spectacular Bid in 1979. After the Kentucky Derby, many believed that he would win the Triple Crown. However, he was defeated by Red Bullet in the Preakness Stakes. After his loss in the Preakness Stakes, he did not race in the third leg of the Triple Crown, the Belmont Stakes.

"FuPeg", as the stallion is affectionately known by his fans, is a son of Mr. Prospector and out of Angel Fever, a mare by leading sire Danzig. In addition to the Kentucky Derby, Fusaichi Pegasus also won the Grade 2 San Felipe Stakes and Jerome Handicap.

In 2000, Fusaichi Pegasus was sold to Irish breeder Coolmore Stud for a reported price of more than US$60 million (£35m). The previous record for a stallion prospect was US$40m (£24m), paid in 1983 for Shareef Dancer. For several years, Fusaichi Pegasus served as a "shuttle stallion" standing at Coolmore's Ashford Stud near Versailles, Kentucky during the Northern Hemisphere breeding season and at Coolmore Australia near Jerrys Plains, New South Wales during the Southern Hemisphere breeding season, but as of the 2010 breeding season stands exclusively in Kentucky. Among his progeny are Grade 1 winners Bandini and Haradasun.

FULL ARTICLE AT WIKIPEDIA.ORG
This article is licensed under the GNU Free Documentation License.
It uses material from the Wikipedia article "Fusaichi Pegasus."
Back to Article
/