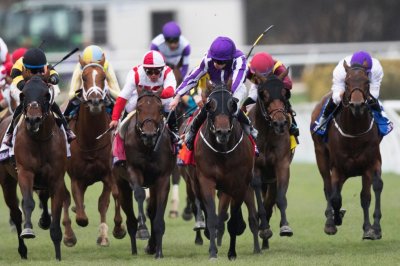 She was awesome. I gave her one spank and she took off

We didn't race him hard last year after this race. Mr. Stronach (owner Frank) told me to take it easy and have him ready for the end of the year. We took it easy with him and he didn't have a hard year last year

The Frank E. Kilroe Mile Handicap is an American Thoroughbred horse race run in early March at Santa Anita Park in Arcadia, California. Open to horses four years of age and older, it is raced over a distance of one mile (1.6 km). The Grade I race currently offers a purse of $300,000.

FULL ARTICLE AT WIKIPEDIA.ORG
This article is licensed under the GNU Free Documentation License.
It uses material from the Wikipedia article "Frank E. Kilroe Mile."
Back to Article
/