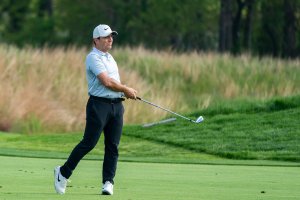 Sports News // 2 years ago
British Open 2019: How to watch, betting odds
The 2019 British Open tees off Thursday at Royal Portrush in Northern Ireland. Here is how to watch and the betting favorites to win the tournament.

I enjoy links golf and I enjoyed it a lot today

Francesco Molinari (born 8 November 1982) is an Italian professional golfer. He is a two-time winner on the European Tour and was a member of the 2010 European Ryder Cup team.

At the 2004 European Tour qualifying school, Molinari earned full playing status for the 2005 season, in which he ultimately finished in eighty-sixth place in the tour's Order of Merit standings.

FULL ARTICLE AT WIKIPEDIA.ORG
This article is licensed under the GNU Free Documentation License.
It uses material from the Wikipedia article "Francesco Molinari."