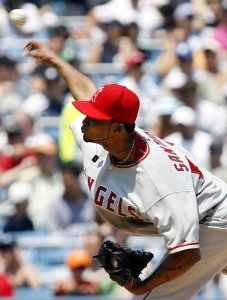 MLB // 2 years ago
Umpire makes super smooth catch on bat flip from Detroit Tigers' Nick Castellanos
Home plate umpire Manny Gonzalez had one of the best catches of the game when he snagged a bat flip during a Minnesota Twins win against the Detroit Tigers.

MLB // 2 years ago
Felix, Mariners look to stave off sweep vs. A's
OAKLAND, Calif. -- Oakland Athletics right-hander Josh Lucas will make his first big-league start against a legend Thursday afternoon when the Seattle Mariners send ace Felix Hernandez to the mound in the finale of the three-game series.

Santana was born Johan Ramon Santana, and used that name throughout his life until 2003. At that time, he decided to change his name to avoid having the same name as pitching star Johan Santana. According to Ervin Santana, "I just came up with Ervin... Ervin Santana, that sounds good."

Santana was a starting pitcher for the Angels' Double-A affiliate, the Arkansas Travelers early in 2005, where he posted a 5-1 record and 2.31 ERA in 7 starts. Following an injury to Angels starting pitcher Kelvim Escobar, Santana earned a promotion. He made his first major league appearance on May 17, 2005 against the Cleveland Indians, in which he gave up the pitching version of the cycle in first four batters that he faced. In his second start, facing the Chicago White Sox's Jon Garland (who at the time had the best record in baseball), Santana bested Garland by pitching a complete game shutout. He gave up only 5 hits and struck out 7 for his first career victory. Santana then went on the disabled list and was sent back down to the minors to the Angels Triple-A affiliate, the Salt Lake Bees.

FULL ARTICLE AT WIKIPEDIA.ORG
This article is licensed under the GNU Free Documentation License.
It uses material from the Wikipedia article "Ervin Santana."
Back to Article
/