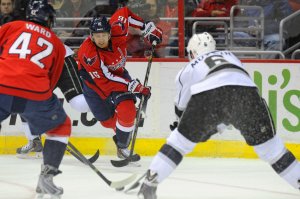 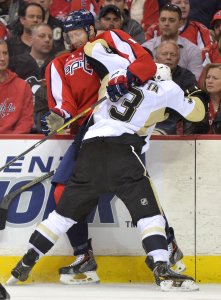 NHL // 2 years ago
Wild's Kevin Fiala flips stick off ice to teammate Anthony Bitetto
Kevin Fiala might be teammate of the year after flipping Anthony Bitetto's stick back into his hands during a Minnesota Wild loss to the Nashville Predators.

NHL // 2 years ago
Minnesota Wild try to keep momentum versus surging Pittsburgh Penguins
There have been glimpses of brilliance during an otherwise puzzling five-week stretch for the Minnesota Wild that have seen them win four of 14 matches.

NHL // 2 years ago
Wild visit Blue Jackets in battle of teams on rise
COLUMBUS, Ohio -- Two teams with identical records get together at Nationwide Arena on Thursday night when the Columbus Blue Jackets play host to the Minnesota Wild.

NHL // 3 years ago
Kane-led Sharks aim for 2-0 series lead vs. Ducks
The San Jose Sharks have an opportunity to assume a commanding lead in their first-round Stanley Cup Playoff Series against the Anaheim Ducks.

NHL // 4 years ago
Washington Capitals come back to beat Toronto Maple Leafs on Tom Wilson's OT winner
Playing hockey as a kid in Toronto, Tom Wilson often imagined what it would be like to score a game-winning goal in the playoffs.

NHL // 4 years ago
Pittsburgh Penguins' Sidney Crosby gets 1,000th point in win over Jets
PITTSBURGH -- Chris Kunitz has been involved in quite a bit of his superstar center's offensive exploits.

NHL // 4 years ago
Evgeni Malkin, Matt Murray lead Pittsburgh penguins past Canucks
PITTSBURGH -- Evgeni Malkin, in a return from injury, had a goal and an assist, and Matt Murray made 29 saves Tuesday as the Pittsburgh Penguins shut out the Vancouver Canucks 4-0 at PPG Paints Arena.

Eric Fehr (born September 7, 1985) is a Canadian ice hockey right winger currently playing for the Washington Capitals of the National Hockey League. Fehr was a first-round draft pick in the 2003 NHL Entry Draft by the Capitals, chosen 18th overall.

Fehr played 11 games with the Capitals in the 2005–06 NHL season; he went scoreless, with 2 penalty minutes and an even plus/minus rating. He spent the rest of the season with the Hershey Bears and returned to Hershey to start the 2006–07 AHL season. He had a brief callup to the Capitals early in the 2006–07 season and was recalled again in late January. His first game back with the Capitals came on January 27, 2007; Fehr scored his first NHL goal, which would be the game-winner in the Capitals' 7–3 victory over the Carolina Hurricanes.

Fehr recovered from his herniated disc and was called up to the Washington Capitals on February 4, 2008.

FULL ARTICLE AT WIKIPEDIA.ORG
This article is licensed under the GNU Free Documentation License.
It uses material from the Wikipedia article "Eric Fehr."