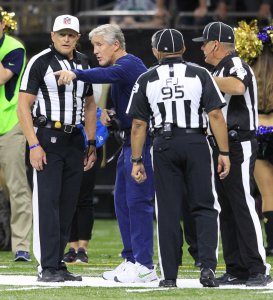 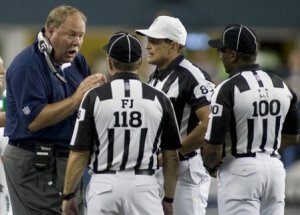 NFL // 3 years ago
NFL adds seven officials from collegiate ranks
The NFL announced its roster of 121 game officials for this season on Friday, which is three fewer than last year.

NFL // 3 years ago
NFL notebook: Packers, Rodgers close to extension
The Green Bay Packers have been working on a new contract for superstar quarterback Aaron Rodgers and it may not be long before it's done.

NFL // 3 years ago
Longtime referee Terry McAulay retires from the NFL
Terry McAulay has retired as a referee from the NFL, league senior vice president of officiating Al Riveron announced on Thursday.

Sports News // 6 years ago
NFL drops Ed Hochuli investigation
CHARLOTTE -- Audio, not age, was the key factor in the NFL deciding not to pursue further information in the incident between Carolina Panthers quarterback Cam Newton and referee Ed Hochuli.

Edward G. Hochuli[1] (/ˈhɒkjʉli/; born December 25, 1950)[2] is an attorney for the firm of Jones, Skelton & Hochuli, P.L.C. since 1983, and has been an American football official in the National Football League (NFL) since the 1990 NFL season. His uniform number is 85. Prior to his officiating career, he played college football for four seasons at the University of Texas at El Paso (UTEP).

FULL ARTICLE AT WIKIPEDIA.ORG
This article is licensed under the GNU Free Documentation License.
It uses material from the Wikipedia article "Ed Hochuli."