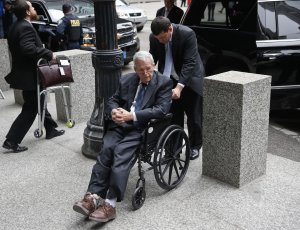 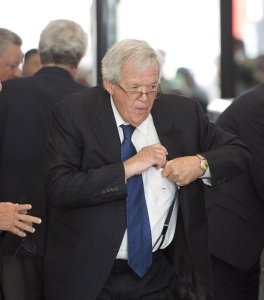 U.S. News // 5 years ago
Judge rules Hastert 'hush money' lawsuit can proceed
A day after Dennis Hastert was sentenced to 15 months in prison, his victim was given the go-ahead by a judge to proceed with a lawsuit against the former U.S. House Speaker.

If the Democrats sweep (the November elections), then we'd have no ability to fight back and get our message out

The people who want to see this thing blow up are ABC News and a lot of Democratic operatives, people funded by (liberal activist) George Soros

John Dennis "Denny" Hastert (pronounced /ˈhæstərt/; born January 2, 1942) is an American politician. He was a Republican member of the United States House of Representatives from 1987 to 2007, representing Illinois's 14th congressional district, and served as Speaker of the House from 1999 to 2007.

Originally elevated to the Speakership on January 6, 1999, he surpassed Joseph Gurney Cannon as the longest-serving Republican Speaker in history on June 1, 2006. Hastert was reelected to an eleventh term in Congress in the 2006 general election, defeating former United States Navy intelligence analyst John Laesch. However, the Republican Party lost its majority in the House and Hastert did not seek a leadership position in the 110th Congress. He resigned his seat mid-session on November 26, 2007. Hastert endorsed former Massachusetts governor Mitt Romney for the 2008 Republican Presidential nomination before Romney withdrew from the race.

Hastert was born in Aurora, Illinois and grew up in Oswego, Illinois. He is of Luxembourgish ancestry. Dennis was the eldest of three sons of Naomi and Jack Hastert. As a young man he worked in the Plainfield, Illinois, family restaurant "The Clock Tower" as a fry cook. He briefly attended North Central College but graduated from Wheaton College, Illinois, in 1964, and earned a master's degree in education from Northern Illinois University, in 1967. Although Hastert was high school "football and wrestling star" and a wrestler at Wheaton College in the 1960s, he was later injured, and as a result never served in Vietnam. After a stint teaching English in Osaka, Japan, he moved to Yorkville in 1964, 55 miles (89 km) west of Chicago, and took a job as a government and history teacher at Yorkville High School from 1964 to 1980. He also coached wrestling and football, leading the wrestling team to a state title in 1976. His family owns the locally famous fried chicken restaurant, "The White Fence Farm," in Bolingbrook, Ill.

FULL ARTICLE AT WIKIPEDIA.ORG
This article is licensed under the GNU Free Documentation License.
It uses material from the Wikipedia article "Dennis Hastert."