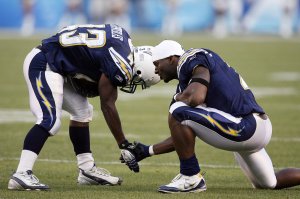 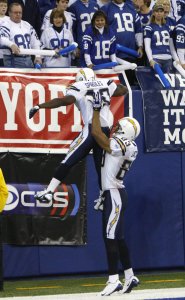 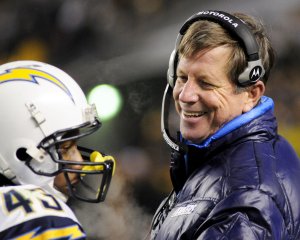 NFL // 1 year ago
Eagles surprisingly rely on Josh Adams to power ground game
It looks like Doug Pederson is playing favorites now, and his favorite running back is Josh Adams, the undrafted rookie free agent from Notre Dame.

NFL // 1 year ago
Fantasy Football Who's In, Who's Out: Week 10 NFL injury report
As Week 10 hits in the NFL, several teams have issues keeping their offenses stable and healthy.

NFL // 1 year ago
Fantasy Football Who's In, Who's Out: Week 8 NFL injury report
Coming off a Thursday night game in which the Houston Texans lost Will Fuller for the season with a torn ACL, several other teams declared their receivers out.

NFL // 1 year ago
Fantasy Football Who's In, Who's Out: Week 7 NFL injury report
Here is a roundup of each injury report headed into Week 7 of the NFL season, including key fantasy players who have been ruled out.

NFL // 1 year ago
Eagles, Giants meet in pivotal NFL East clash
The defending Super Bowl champion Philadelphia Eagles are bumbling and stumbling along with a 2-3 record and two straight losses for the first time since 2016.

NFL // 1 year ago
Eagles place Jay Ajayi on injured reserve, reportedly suffers torn ACL
It appears the season is over for the Philadelphia Eagles' leading rusher, running back Jay Ajayi.

NFL // 1 year ago
NFL Injury Report: Week 5 Sunday games
Several teams will be missing offensive playmakers because of injuries during Sunday's games in Week 5 of the NFL season.

NFL // 1 year ago
NFL Week 4 injury list includes 21 out
Injuries are still a factor in Week 4 for the NFL, which listed 21 players officially out for Sunday's games.

NFL // 1 year ago
Eagles WR Jeffery (shoulder) cleared for contact
Wide receiver Alshon Jeffery of the Philadelphia Eagles has been cleared for contact after recovering from offseason surgery on his right shoulder, head coach Doug Pederson said at the start of his press conference on Wednesday.

Darren Lee Sproles (born June 20, 1983 in Waterloo, Iowa) is an American football running back who plays for the New Orleans Saints. He was drafted by the San Diego Chargers in the fourth round of the 2005 NFL Draft. He played college football at Kansas State.

He was named as Kick Returner for the San Diego Chargers 50 Greatest Chargers team.

Sproles attended Rolling Ridge Elementary, then Oregon Trail Junior High, followed by Olathe North High School, all in Olathe, Kansas. He has been conquering a speech impediment he has had since childhood. Sproles was a star in football, earning the name "Tank," after being born at 10 lb (4.5 kg). For two consecutive years, he was an All-Sunflower League honoree, All-Metro honoree, and an All-State selection. Additionally, he was twice named The Kansas City Star Player of the Year. As a senior, he was named the Kansas Hall of Fame Player of the Year and the USA Today Kansas Player of the Year. Throughout his high school career, Sproles rushed for 5,230 yards, averaging nearly 8.4 yards per carry and 79 touchdowns.

FULL ARTICLE AT WIKIPEDIA.ORG
This article is licensed under the GNU Free Documentation License.
It uses material from the Wikipedia article "Darren Sproles."
Back to Article
/