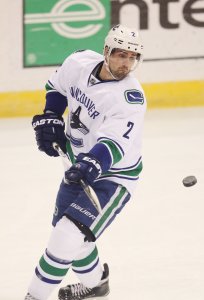 NHL // 3 years ago
Devils hope for better outcome vs. Predators
This kind of deja vu, the New Jersey Devils can do without.

NHL // 5 years ago
Viktor Arvidsson, Craig Smith lead Nashville Predators past Dallas Stars
DALLAS -- The Nashville Predators were already assured of a spot in the Stanley Cup playoffs, but they wanted to ensure their offense is firing on all cylinders heading into the postseason.

NHL // 5 years ago
Back from illness, Brian Elliott leads Calgary Flames past Dallas Stars
CALGARY, Alberta -- Brian Elliott got back in his routine on Friday, won the battle with the flu and beat the Dallas Stars.

NHL // 5 years ago
Patrik Laine's hat trick powers Winnipeg Jets to 5-2 win over Dallas Stars
WINNIPEG, Manitoba -- The love affair between Patrik Laine and fans of the Winnipeg Jets reached new heights Tuesday night as the Finnish sniper potted his third hat trick of the season in leading his team to a much-needed 5-2 victory over the Dallas Stars.

NHL // 5 years ago
NHL roundup: recap, scores, notes for every game played on January 31
EDMONTON, Alberta -- The Minnesota Wild issued a rather convincing statement Tuesday in the form of a 5-2 victory over the Edmonton Oilers, extending their streak to 12-0-2 in their last 14 road games.

Daniel Hamhuis (born December 13, 1982) is a Canadian professional ice hockey defenceman who currently plays for the Vancouver Canucks of the National Hockey League (NHL). Hamhuis played major junior hockey with the Prince George Cougars of the Western Hockey League (WHL) and was selected 12th overall by the Nashville Predators in the 2001 NHL Entry Draft. The following year, he was awarded the Bill Hunter Memorial Trophy and Four Broncos Memorial Trophy as the league's best defenceman and player of the year, respectively; he would also be named the top defenceman in the Canadian Hockey League (CHL), the governing body of major junior hockey in Canada. After a final season in the WHL, Hamhuis made his professional debut with the Milwaukee Admirals of the American Hockey League (AHL), a minor league affiliate of the Predators. He made his NHL debut the next year for Nashville. After five seasons with the club, Hamhuis became an unrestricted free agent and signed a six-year contract with the Canucks.

Hamuis suffered a broken leg during his junior draft-eligible season, limiting his exposure to WHL scouts. Consequently, he went unselected in the WHL Bantam Draft. Hamhuis went unselected as a bantam player in the WHL Bantam Draft. He later admitted to not even being aware of the junior draft until a couple months later. The Prince George Cougars later put Hamhuis on their protected list and he went on to make his junior debut in 1998–99. He recorded a goal and four points over 56 games while being named both Prince George's rookie and scholastic player of the year. The following season, he improved to 10 goals and 33 points in 70 games. He helped Prince George advance to the Conference Finals, scoring two goals and five points in a junior career-high of 13 post-season games. He was also named the Cougars' scholastic player for the year for the second year in a row.

FULL ARTICLE AT WIKIPEDIA.ORG
This article is licensed under the GNU Free Documentation License.
It uses material from the Wikipedia article "Dan Hamhuis."