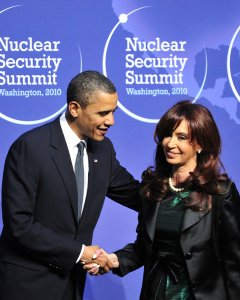 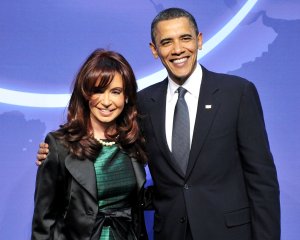 World News // 2 years ago
Argentina cracks down on anarchists after bombings ahead of G20 summit
Argentina cracked down Thursday on anarchist groups blamed for placing two bombs in the home of a federal judge and on the gravestone of a former police chief.

World News // 3 years ago
Argentina judge issues arrest warrant for former President Kirchner
A judge in Argentina issued a warrant for the arrest of former president Cristina Fernandez de Kirchner on Thursday on charges of treason.

Top News // 4 years ago
The Almanac
On Feb. 19, 1942, as a security measure during World War II, the U.S. government began relocating Japanese-Americans to internment camps in remote areas of several states.

World News // 4 years ago
Argentina, Britain agree to identify bodies from Falklands War
Argentina and Britain have agreed to identify the bodies buried on the disputed Falkland Islands after the 1982 war, both nations' foreign ministers announced.

Some pickets are rational, others are violent. It's a methodology I disagree with, but it's up to the courts to decide

An Argentine federal court has requested the extradition of several Iranian officials allegedly involved in the attack. It is for Iran to have them extradited so they can face trial in Argentina

There are few nations with which we have such important common historic bonds. The Peruvian administration sent us airplanes, pilots, missiles, and aid during the Malvin as wartime

Cristina Elisabet Fernández de Kirchner (Spanish pronunciation: ; born 19 February 1953), commonly known as Cristina Fernández or Cristina Kirchner (or simply Cristina), is the 55th and current President of Argentina and the widow of former President Néstor Kirchner. She is Argentina's first elected female President, and the second female President ever to serve (after Isabel Martínez de Perón, 1974–1976). A Justicialist, Fernández served one term as National Deputy and three terms as National Senator for both Santa Cruz and Buenos Aires Provinces.

A native of La Plata, Buenos Aires, Fernández is a graduate of the National University of La Plata. She met her husband during her studies, and they moved to Santa Cruz to work as lawyers. In May 1991, she was elected to the provincial legislature. Between 1995 and 2007, she was repeatedly elected to the Argentine National Congress, both as a National Deputy and National Senator. During Kirchner's presidency (2003–2007) she acted as First Lady. Fernández was chosen as the Front for Victory presidential candidate in 2007. In the October 2007 general election she obtained 45.3% of the vote and a 22% lead over her nearest rival, avoiding the need for a runoff. She was inaugurated on December 10, 2007. As a First Lady, and later President, she has become a fashion icon for women, a notable advocate for human rights, poverty awareness and health improvement.

Fernández was born in Ringuelet, a suburb west of La Plata, Province of Buenos Aires, daughter of Eduardo Fernández and Ofelia Esther Wilhelm. She studied law at the National University of La Plata during the 1970s and became active in the Peronist Youth. During her studies there, she met her future spouse, Néstor Kirchner. They were married on March 9, 1975, and had two children: Máximo and Florencia. Néstor died on October 27, 2010 after suffering a heart attack.

FULL ARTICLE AT WIKIPEDIA.ORG
This article is licensed under the GNU Free Documentation License.
It uses material from the Wikipedia article "Cristina Fernandez de Kirchner."
Back to Article
/