Top News // 6 months ago
The Almanac
On Dec. 17, 1989, "The Simpsons," which began as a feature of The Tracy Ullman Show, had its first stand-alone episode broadcast. 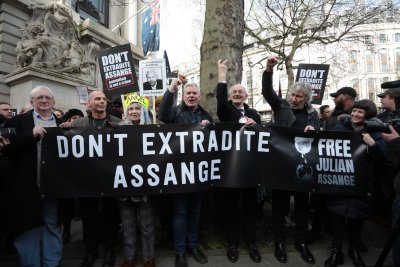 World News // 9 months ago
Judge threatens to remove Assange on 2nd day of extradition hearing
A British judge on Tuesday threatened to remove WikiLeaks co-founder Julian Assange from the courtroom during an extradition hearing after he interjected while a witness was being questioned.

U.S. News // 1 year ago
Federal judge releases Chelsea Manning from jail
A federal judge ordered former U.S. Army intelligence analyst Chelsea Manning to be released after she was imprisoned for defying a subpoena to testify before a grand jury investigating WikiLeaks.

Assange himself says they have never met (if it cannot be proven that Manning leaked data directly to Assange, then the U.S. authorities will have no case to prosecute or extradite the WikiLeaks founder)

We are Americans, and he's supposed to be on our side

Chelsea Elizabeth Manning[4] (born Bradley Edward Manning, December 17, 1987) is a United States Army soldier who was convicted in July 2013 of violations of the Espionage Act and other offenses, after disclosing to WikiLeaks nearly three-quarters of a million classified or unclassified but sensitive military and diplomatic documents.[5] Manning was sentenced in August 2013 to 35 years' imprisonment, with the possibility of parole in the eighth year, and to be dishonorably discharged from the Army.[2] Manning is a trans woman who, in a statement the day after sentencing, said she had felt female since childhood, wanted to be known as Chelsea,[6] and desired to begin hormone replacement therapy.[7] From early life and through much of her Army life, Manning was known as Bradley; she was diagnosed with gender identity disorder while in the Army.[8]

FULL ARTICLE AT WIKIPEDIA.ORG
This article is licensed under the GNU Free Documentation License.
It uses material from the Wikipedia article "Chelsea Manning."
Back to Article
/