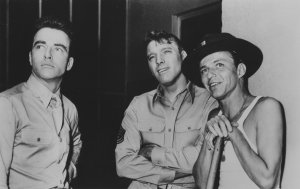 Burton Stephen "Burt" Lancaster (November 2, 1913 – October 20, 1994) was an American film actor noted for his athletic physique, distinctive smile (which he called "The Grin") and, later, his willingness to play roles that went against his initial "tough guy" image. Initially dismissed as "Mr Muscles and Teeth." in the late 1950s Lancaster abandoned his "all-American" image and gradually came to be regarded as one of the best actors of his generation.

Lancaster was nominated four times for Academy Awards and won once, for his work in Elmer Gantry in 1960. He also won a Golden Globe for that performance, and BAFTA Awards for The Birdman of Alcatraz (1962) and Atlantic City (1980). His production company, Hecht-Hill-Lancaster, was the most successful and innovative star-driven independent production company in 1950s Hollywood, making movies such as Marty (1955), Trapeze (1956), and Sweet Smell of Success (1957).

Lancaster also ventured in directing, with two films: The Kentuckian (1955) and The Midnight Man (1974).

FULL ARTICLE AT WIKIPEDIA.ORG
This article is licensed under the GNU Free Documentation License.
It uses material from the Wikipedia article "Burt Lancaster."
Back to Article
/