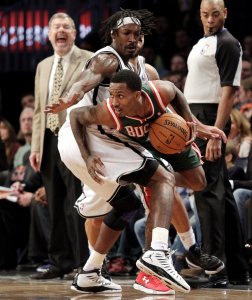 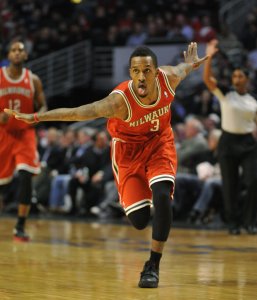 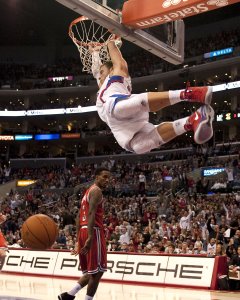 NBA // 5 years ago
Washington Wizards top New York Knicks to tie for 3rd in Eastern Conference race
NEW YORK -- John Wall thinks if the Washington Wizards want to make a deep run in the playoffs, they will have to ramp up their defense.

NBA // 5 years ago
NBA roundup: recap, scores, notes for every game played on March 24
BOSTON -- Devin Booker erupted for an NBA season-high 70 points, the most points ever scored in a game against the Boston Celtics, but it wasn't nearly enough for his Phoenix Suns on Friday night.

Brandon Jennings (born September 23, 1989 in Compton, California) is an American professional basketball player for the Milwaukee Bucks of the National Basketball Association (NBA) who plays at point guard.

Jennings was a highly acclaimed high school player, averaging 32.7 points and 7.4 assists as a senior, and won all major player of the year awards in his senior year. After graduating from Oak Hill Academy, he decided to play professional basketball with the Italian club Lottomatica Roma instead of playing collegiately for the University of Arizona Wildcats, leading to controversy and debate on the NBA's "prep-to-pro" policy adopted in 2006. After a year in Italy, Jennings declared for the 2009 NBA Draft and was selected 10th overall by the Bucks.

Brandon Jennings was born to Alice Knox and Bryan Jennings. He has a brother named Terrence Phillips.

FULL ARTICLE AT WIKIPEDIA.ORG
This article is licensed under the GNU Free Documentation License.
It uses material from the Wikipedia article "Brandon Jennings."