U.S. News // 3 weeks ago
Thunberg to Congress on climate change: 'You still have time to do the right thing'
Prominent climate activist Greta Thunberg, during a congressional hearing Thursday, challenged world leaders to end fossil fuel subsidies, end new exploration and extraction and completely divest from the industry.

U.S. News // 3 weeks ago
Biden seeks to return U.S. to climate leadership with global summit
Five years to the day after world leaders signed the Paris Agreement, President Joe Biden is hosting a summit on Thursday with fellow heads of state to stimulate efforts to tackle climate change.

World News // 3 weeks ago
Armin Laschet tabbed as German conservative nominee to succeed Merkel
Armin Laschet became one of the leading candidates to replace Angela Merkel as Germany's chancellor in September after he held off Markus Soeder Tuesday.

World News // 1 month ago
India, Brazil fuel surge in COVID-19 cases, deaths in world
India and Brazil are dominating a surge in COVID-19 deaths and cases as nations around the world are ramping up vaccinations in efforts to curb the pandemic and amid restrictions, including lockdowns.

World News // 1 month ago
German officials: People under 60 shouldn't get AstraZeneca booster
Germany's independent vaccine commission is recommending those under 60 years old who already received the first of the AstraZeneca's two-shot regimen to complete their inoculation with a different product.

Germany is ready for an energy and raw materials partnership

The euro is good for us, the euro is part of Germany's economic success and a Europe without the euro is unthinkable 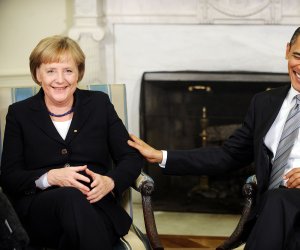 Angela Dorothea Merkel (German:  ( listen); née Kasner in 1954) is the current Chancellor of Germany (since 22 November 2005). Merkel, elected to the Bundestag (German Parliament) from Mecklenburg-Vorpommern, has been the chairwoman of the Christian Democratic Union (CDU) since 2000, and chairwoman of the CDU-CSU (Christian Social Union) parliamentary coalition from 2002 to 2005.

From 2005 to 2009 she led a grand coalition with the Christian Social Union (CSU), its Bavarian sister party, and the Social Democratic Party of Germany (SPD), formed after the 2005 federal election on 22 November 2005. In the elections of 27 September 2009, her party, the CDU, obtained the largest share of the votes, and formed a coalition government with the CSU and the Free Democratic Party (FDP). Her government was sworn in on 28 October 2009.

In 2007, Merkel was also President of the European Council and chaired the G8. She played a central role in the negotiation of the Treaty of Lisbon and the Berlin Declaration. In domestic policy, health care reform and problems concerning future energy development have thus far been major issues of her tenure.

FULL ARTICLE AT WIKIPEDIA.ORG
This article is licensed under the GNU Free Documentation License.
It uses material from the Wikipedia article "Angela Merkel."
Back to Article
/