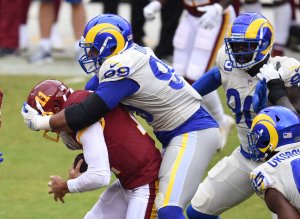 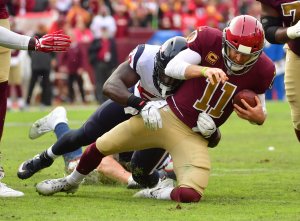 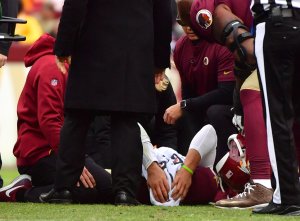 NFL // 4 months ago
'Healthy' QB Dak Prescott plans on 2022 Cowboys Super Bowl parade
Dak Prescott declared himself as "healthy" and said he plans to get a Super Bowl parade for the Dallas Cowboys during his first news conference since signing a $160 million contract extension with the franchise.

NFL // 5 months ago
Alex Smith says Washington 'didn't want' him on team in 2020
Washington Football Team quarterback Alex Smith completed one of the best career comebacks in NFL history last season, but he says several people within the franchise didn't want him on the roster in 2020.

NFL // 6 months ago
Washington beats Eagles, makes playoffs at 7-9
Alex Smith and the Washington Football Team rallied for a narrow lead and held on through the second half to beat the Philadelphia Eagles and clinch a playoff berth Sunday night.

After weeks of evaluating future opportunities with my family, I have decided the best decision for me is to forgo my senior year at Utah and declare myself eligible for the 2005 NFL draft

Alexander Douglas Smith (born May 7, 1984) is a professional American football quarterback for the San Francisco 49ers of the National Football League. Smith was drafted with the 1st-overall pick in the 1st round of the 2005 NFL Draft by San Francisco from the University of Utah.

Born in Seattle, Smith grew up in La Mesa, California. As a starter at Helix during his junior and senior years Smith led his team to a record of 25-1, including two San Diego CIF section championships. He was named to the first-team all-conference and all-county squads in the San Diego CIF system. Smith also earned the conference offensive player of the year twice, and twice won the team MVP for Helix. During his time at Helix, Smith set a school record by throwing for six touchdowns in one game, and recorded the second-highest completion percentage in San Diego CIF history. While at Helix, he played with 2005 Heisman Trophy winner (since vacated) Reggie Bush. Smith and Bush were later finalists for the 2004 Heisman, making it the first time a high school had two finalists at the same ceremony.

FULL ARTICLE AT WIKIPEDIA.ORG
This article is licensed under the GNU Free Documentation License.
It uses material from the Wikipedia article "Alex Smith."
Back to Article
/