UNICEF calls for children to be evacuated from Syrian prison

Syria Democratic Forces take up position at Ghweran district in Hasaka, northeastern Syria Friday after Islamic State fighters attacked a prison in the area. UNICEF said Tuesday close to 850 children remain in the prison and the agency called on the international community to evacuate them from the facility. Photo By Ahmed Mardnli/EPA-EFE

Jan. 25 (UPI) -- The United Nations Children's Fund on Tuesday called on the international community to help more than 800 children imprisoned in a military detention facility in northeast Syria.

The organization -- known as UNICEF -- made the appeal in a news release, saying it has received "deeply worrisome reports of fatalities among children in the Ghwayran military detention facility, in al-Hasakah."

The former school is the country's largest facility for suspected members of the Islamic State, housing around 3,000 prisoners in poor conditions, according to The Washington Post.

An attack on the prison Sunday killed more than 25 members of the Syrian Democratic Forces, which are backed by the U.S.-led Operation Inherent Resolve.

The U.S. State Department said the Islamic State had been attempting a siege on the prison for more than a year. It also praised SDF forces for their ability to thwart previous attacks and minimize the severity of the attack.

The SDF said almost 160 Islamic militants were killed during the attack, according to The Washington Post.

"We are also deeply concerned by reports that children trapped inside the facility may be forced to play an active part in the ongoing clashes between detainees and security forces. These children should never have been held in military detention in the first place. The violence they are subjected to may amount to war crimes," UNICEF Executive Director Henrietta Fore said in a statement.

"Almost 850 children, some as young as 12 years old, are currently in detention in northeast Syria, most of them are held in the Ghwayran facility. The majority of these children are Syrian and Iraqi boys while the rest are of 20 other nationalities. None of them has been charged with any crime under national or international law. The children of foreign nationals have received little to no support from their home countries."

The organization is appealing for immediate international help.

"The time to act is long overdue," Fore said.

"We urge the actors currently in control of the detention facility and the detaining authorities to unconditionally release all children, starting with the youngest and those with urgent medical and other needs.

"If and when children are evacuated to a safe location, humanitarian actors, without any distinction, should be granted unimpeded and sustained access to the children for emergency care and assistance. We also plead with member states to do everything in their power to repatriate children who are their citizens or born to their nationals, in line with international child protection and human rights standards. Member states who can support these efforts should do so." 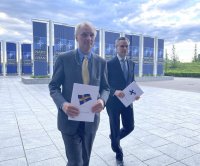 World News // 20 hours ago
At least 12 dead, several hurt after wall collapses at India salt factory
May 18 (UPI) -- A wall collapsed at a salt factory in western India on Wednesday, killing at least a dozen workers there and injuring several others, officials said.
Advertisement