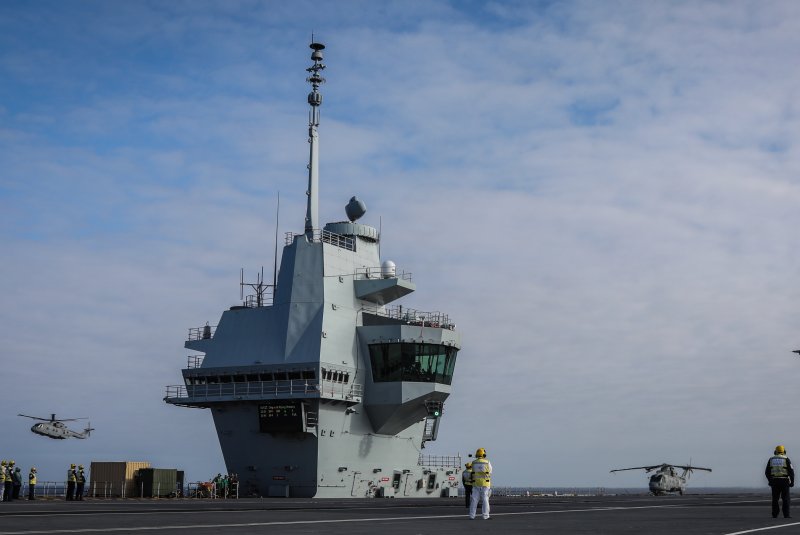 The HMS Queen Elizabeth is expected to take part in drills with the United States, Australia, Japan and South Korea. Photo courtesy of the Royal Navy/U.S. Navy

Aug. 3 (UPI) -- North Korea slammed a British decision to deploy the HMS Queen Elizabeth aircraft carrier in Asia ahead of the carrier's port call in South Korea later this month.

Pyongyang's foreign ministry published on Tuesday a statement from Choe Hyon Do, a researcher with the North Korea-Europe Association, accusing Britain of escalating tensions in the region.

"Britain, which intensifies the situation by pushing warships into the distant Asia-Pacific region, is using the move as an excuse to use [North Korea] as a threat," Choe said. "It is a kind of provocation."

The Queen Elizabeth and a fleet of warships embarked on a world tour in May. The Carrier Strike Group has so far conducted joint exercises with Indian and Singaporean forces, and is expected to take part in drills with the United States, Australia, Japan and South Korea.

"The days when the British Empire threatened various countries around the world with 'inclusion diplomacy' and colonized them at will have passed forever," the North Korean statement read. "Better to pay attention to the troublesome aftermath of Brexit."

Britain has accused North Korea and China of trying to isolate Japan and South Korea, and of threatening freedom of navigation in the Indo-Pacific region, the North Korean official claimed.

British Prime Minister Boris Johnson said last month that his country intends to show "our friends in China that we believe in the international law of the sea ... [in] a confident but not confrontational way."

Commodore Steve Moorhouse, commanding officer and captain of HMS Queen Elizabeth, tweeted in Korean on Sunday that the Carrier Strike Group had arrived in the Western Pacific.

"The mission of the British Carrier Group is centered on cooperation and it looks forward to strengthening the partnership between the United Kingdom and [South] Korea for regional security and prosperity," Moorhouse said.

World News // 9 hours ago
First migrants deported from U.S.-Mexico border arrive back in Haiti
Sept. 19 (UPI) -- Two flights carried the first group of Haitian migrants that had gathered near the U.S.-Mexico border back to the country on Sunday morning.

World News // 14 hours ago
Malaysia COVID deaths spike with sixth-most in week; world down 5%
Sept. 19 (UPI) -- Malaysia has become a coronavirus hotspot with the sixth-most death among nations last week despite overall being only 31st as world's fatalities declined 5% and cases 9%.