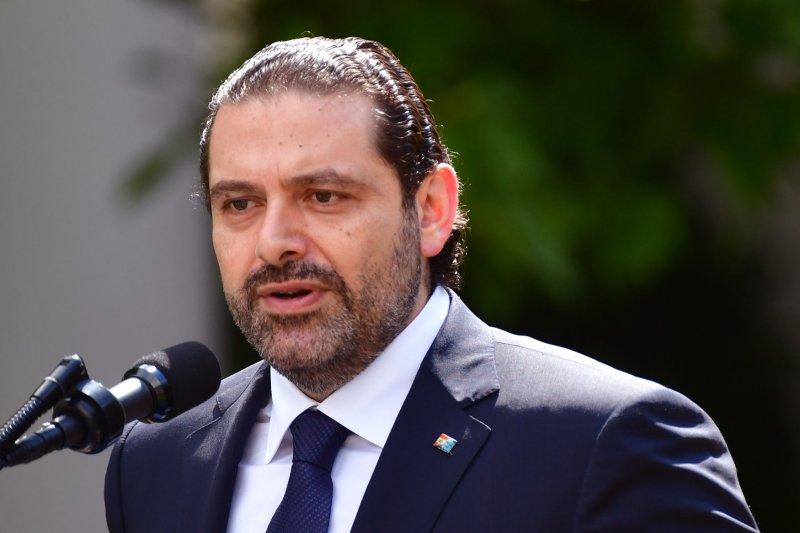 July 15 (UPI) -- Lebanon's Prime Minister-designate Saad Hariri stepped down on Thursday after failing to form a government within the past eight months.

Hariri said he made the decision to step down after President Michel Aoun rejected his latest Cabinet lineup, which he had submitted just 24 hours earlier.

"During the conversation, we proposed that the president take more time to think about the proposal, and (Aoun) said that it looks like we're not going to agree," he said. "For that reason, I have stepped down from forming the government. God help this country."

Hariri later said he selected his candidates to form the government based on their expertise and ability to reform the economy while accusing Aoun of failing to do the same.

"I resigned in 2019 because I wanted a government of experts and if we formed Michel Aoun's government then the country won't be saved," he said. "The main problem of this country is Michel Aoun, who is allied with Hezbollah, who in turn protects him. This is the equation in the country and if someone can't see it then they're blind."

Aoun in turn accused Hariri of refusing his requests for amendments to the proposal, saying his decision to halt further discussion indicated he had planned to resign before the meeting began.

"Hariri rejected any amendments related to changes in ministries, their sectarian distribution and the names associated with them," Aoun's office said.

Aoun's office also said he received a joint message from U.S. Secretary of State Antony Blinken and French Foreign Minister Yves Le Drian calling on him to expedite the formation of the government.

The Lebanese Lira, which has declined 90% in value in less than two years, plummetted to an all-time low exceeding 21,000 to the U.S. dollar.

Hariri returned as prime minister-designate in October after Hassan Diab left office in August following the explosion at a warehouse near Beirut's port that killed more than 200 people and injured thousands.

He was tasked with guiding Lebanon out of its economic crisis that left it with large debts to foreign countries but clashed with Aoun and Hezbollah, the militia and political faction that is backed by Iran and holds control over Lebanon's affairs.

World News // 1 hour ago
Report: Britain paid compensation for nearly 300 Afghan civilian deaths
Sept. 23 (UPI) -- The British government paid $944,348 in compensation for the deaths of 86 children and 203 adult civilians at the hands of British forces in Afghanistan, according to a report released Thursday.

World News // 14 hours ago
Myanmar military kidnapping relatives to lure fugitives, U.N. expert says
Sept. 23 (UPI) -- A U.N. authority to Myanmar says military forces that have taken over the Asian nation are abducting family members -- including young children -- as a tactic to compel fugitives to give themselves up.