Germany's CDU elected centrist Armin Laschet to head the party, paving the way for him to possibly succeed Angela Merkel as chancellor in September's elections. Photo by Christian Marquardt/EPA-EFE

Jan. 16 (UPI) -- German Parliament member Armin Laschet was elected leader of the Christian Democrats and may be next in line to replace Chancellor Angela Merkel when she steps down in September.

Laschet, 59, who's considered a centrist, was first elected to the Bundestag in 1994. He served as premier of North Rhine-Westphalia state.

"We'll only win if we remain strong in the center of society," Laschet said in a victory speech broadcast to more than 1,000 delegates. "We must ensure that this centre continues to have faith in us."

As head of the CDU, Laschet will be in a good position to run for chancellor, continuing and expanding Merkel's centrist policies to address climate change and promote stable economic growth. Laschet's Catholic background is expected to swing support from Christian members within the party.

Markus Söder, the leader of the Christian Social Union, a Bavarian-based party, congratulated Laschet on Twitter.

"I'm looking forward to our cooperation! Together we will continue the Union's success story," he tweeted.

Laschet is seen as Merkel's ally; he stood by her when she was criticized by opponents in 2015 when Germany was overwhelmed with hundreds of thousands of asylum-seekers.

The head of the ruling CDU Party is not guaranteed to become chancellor in September, and others may be vying for the job, including Söder or Health Minister Jens Spahn, according to the BBC.

World News // 6 hours ago
Earthquake swarm in Iceland could hint at even bigger event
Nearly constant earthquakes have plagued the main population center of Iceland in recent days, and officials warn this could be a sign of an imminent volcanic eruption. 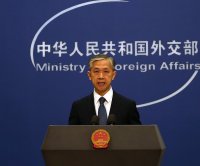 World News // 16 hours ago
China denies wrongdoing, confrontation after Blinken speech
March 4 (UPI) -- China denied it is engaged in a confrontation with the United States after remarks from U.S. Secretary of State Antony Blinken.