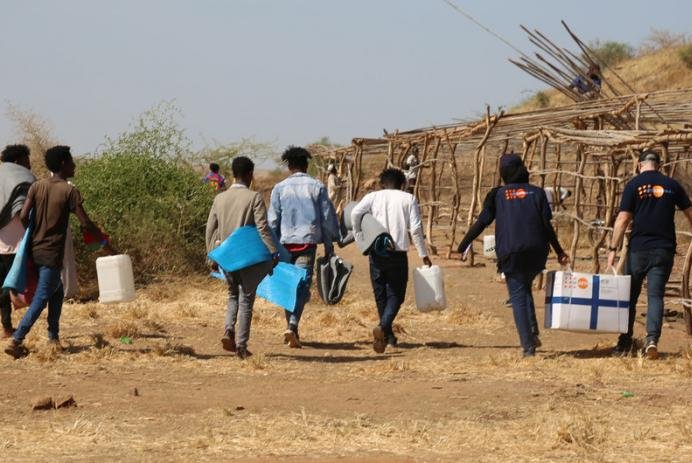 Ethiopian forces attacked the Tigray capital of Mekelle Thursday as more than 40,000 refugees from the region fled into Sudan, the United Nations said. Photo by Sufian Abdul-Mout/UNFPA

Nov. 26 (UPI) -- The Ethiopian government announced Thursday that armed troops would be taking "final action" in Mekelle, the capital city of the country's northern Tigray region, and urged civilians to stay home.

"The 72-hour period granted to the criminal TPLF clique to surrender peacefully is now over and our law enforcement campaign has reached its final stage," Abiy tweeted Thursday, adding that the Ethiopian National Defense Force would be conducting a final military assault.

Abiy said the army troops would take "great care" to make sure to "protect innocent civilians from harm," as well as protect places of worship, public facilities and heritage sites.

The United Nations and other humanitarian agencies are calling for the conflict in Tigray, where more than 6 million people are said to be trapped in Mekelle, to end.

"The U.N. and its humanitarian partners in Ethiopia are urgently calling on all parties to the conflict to comply with their obligations under international humanitarian law and protect civilians and civilian infrastructure, including health facilities, and water systems," U.N. Spokesman Stéphane Dujarric said Monday.

Along with refugee pressure on Sudan, the conflict has made travel and communication impossible in the region, which endangers food and fuel supply remittances for nearly 100,000 refugees from Eritrea.

Hundreds have died in fighting since early November, when Abiy ordered air raids and attacks in Tigray and the Ethiopian parliament voted to dissolve the TPLF.

The TPLF was formerly a dominant force in Ethiopia's ruling coalition, even though the region has only about 6% of the population. The party's power diminished after Abiy became prime minister as he dissolved the ruling coalition to replace it with the Prosperity Party, a single, national party that TPLF refused to join.