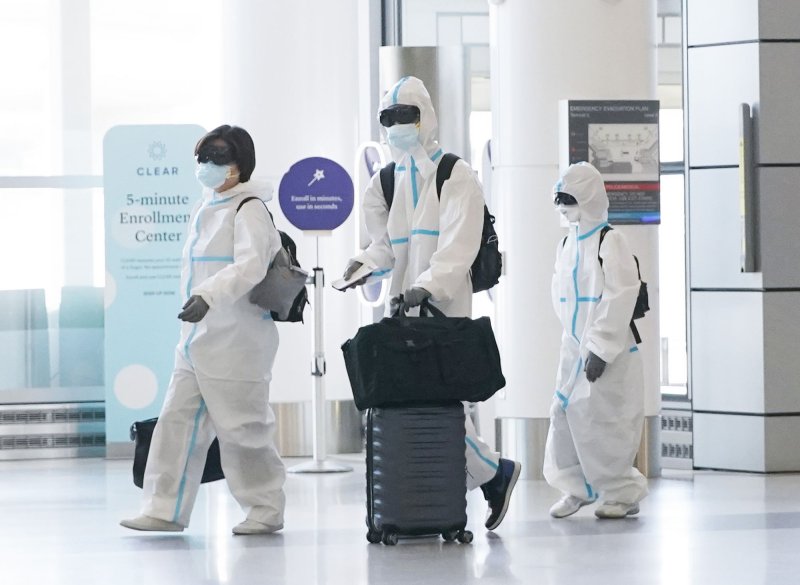 A man, a woman and a child walk through the entrance to terminal 2 at San Francisco International Airport wearing full-body plastic suits, face masks and goggles to prevent catching COVID-19 on Monday. Photo by John Angelillo/UPI | License Photo

Cases of COVID-19 have been growing exponentially since the first infections were diagnosed in the central Chinese city of Wuhan in early December, when it began its global spread.

The virus hit the 1-million mark within three months of the WHO declaring COVID-19 a global health emergency and it reached 10 million infections three months after that.

However, since late June, the number of infections has doubled, and researchers at Johns Hopkins University early Tuesday counted 20,092,855 cases of COVID-19 with a death toll of 736,254.

After 102 consecutive days without a local COVID-19 case, New Zealand Prime Minister Jacinda Ardern said that Auckland, the country's most populous city, would reinstate level three coronavirus restrictions for three days beginning Wednesday after four cases were found within one household in the city.

"In line with our precautionary approach we will be asking Aucklanders to take swift actions with us, as of 12 noon tomorrow, Wednesday, Aug. 12, we will be moving Auckland to level three restrictions," said Ardern.

The restrictions will close businesses such as restaurants, bars and non-essential shops, bar gatherings of more than 10 people and require people to only leave their homes to conduct essential activities such as grocery shopping.

WHO Director-General Tedros Adhanom Ghebreyesus warned on Monday the death toll would hit 750,000 this week but said the situation can still be righted.

"I want to be clear: there are green shoots of hope and no matter where a country, a region, a city or town is, it's never too late to turn the outbreak around," he said.

To cause the turnaround, Tedros said leaders must take action and citizens must embrace new measures, pointing to New Zealand, Rwanda and other countries that suppressed the virus early through testing, treating and isolating those infected as models to follow.

"Getting the basics right provides a clear picture of where the virus is and the necessary targeted actions to suppress transmission and save lives," he said in unusually positive remarks to the media.

He also praised the nations of France, Germany, South Korea and others that had major outbreaks they were able to contain and suppress, saying that other countries are now utilizing their techniques to squelch infections.

"Chains of transmission have been broken by combination of rapid case identification, comprehensive, contact tracing adequate clinical care for patients, physical distancing, mask wearing, regular cleaning of hands and coughing away from others," he said.

"If we suppress the virus effectively, we can safely open up societies," he added.