A Syrian man collects samples from the site of a suspected toxic gas attack in Khan Sheikhun, in Syria's northwestern Idlib province, on April 5, 2017. The Organization for the Prohibition of Chemical Weapons on Wednesday accused the Syrian regime of using chemical weapons in three other attacks earlier that year. File Photo by Omar Haj Kadour/UPI | License Photo

The Organization for the Prevention of Chemical Weapons said the Syrian air force bombed the town of Latamina using sarin gas on March 24 and 25. In the third attack on March 30, the air force carried out a chlorine gas attack on the same town.

The report was the first published by the OPCW's new Investigation and Identification Team. The organization is aligned with the United Nations and other international groups.

"The conflict in the Syrian Arab Republic has brought immense suffering to the entire Syrian population," said OPCW Director-General Fernando Arias in a statement. "Scores of lives have been lost or otherwise destroyed, and millions of people have been displaced.

"In addition to all the atrocities committed during the war, the Syrian people and the international community have been confronted with the repeated use of chemical weapons -- weapons that should belong to the past."

The report said the first attack was launched by a Su-22 military plane with the 50th Brigade of the 22nd Air Division and hit the southern part of the city. It affected 16 people.

The third attack was launched by a Su-22 and again hit southern Latamina, affecting 60 people.

"Attacks of such a strategic nature would have only taken place on the basis of orders from the higher authorities of the Syrian Arab Republic military command," said IIT Coordinator Santiago Oñate-Laborde.

U.S. Secretay of State Mike Pompeo commended the OPCW's Investigation in a statement, saying the United States shares its conclusions that Syria retains "sufficient chemicals" and expertise to not only produce these types of weapons but to deploy them.

Pompeo continued that despite a campaign of disinformation by Syrian President Bashar al-Assad's Russian and Iranian "enablers" will hide his responsibility for chemical weapons attacks, stating some of which rise to the level of war crimes and crimes against humanity.

A senior State Department official under the conditions of anonymity described the report to reporters as "an extraordinary package of identification" that placed responsibility not only on Assad and those at the upper echelon of his cadre but Russia as well.

He added that under normal circumstances a report like this would spur the international community to turn to the U.N. Security Council to respond, which has worked previously but that will have little effect this time as any resolution would be blocked by Russia.

"That mechanism, alas, is not available to us because Russia, usually supported by China, has backed every attempt to hold the regime -- the Assad regime -- and its allies, which includes Russia as well as Iran, accountable," the official said. "Therefore, what we have to do is to take other actions."

Political, diplomatic and economic actions are available to them, the official explained. "Obviously, the administration's position is clear that it will respond if chemical weapons are used. It doesn't go into detail on what that response will be, but it has given two good examples of what that response in the past has been," the official said, referring to the Trump administration's airstrikes on Syria in 2017 and 2018. The Syria Campaign, a human rights organization, said "independent irrefutable proof" that Assad gassed civilians was a long time coming but is only useful as evidence to hold those responsible to account. "The next step must of course be justice for all those who were killed by the Syrian regime," the organization said in a statement. British Secretary of State for Defense Ben Wallace also said via Twitter that the "horrific acts" outlined in the 82-page report will not be tolerated and Britain "will work with our international partners to stand up to such flagrant breaches of international law."

World News // 4 hours ago
Putin reschedules Russian Victory Day parade for June 24
May 26 (UPI) -- Russian President Vladimir Putin said Tuesday the government will stage the Victory Day parade in about a month, after it was postponed due to the coronavirus pandemic.

World News // 8 hours ago
Volkswagen loses landmark civil case in emissions scandal
May 26 (UPI) -- Germany's highest civil court has ruled that Volkswagen must buy back vehicles that were fitted with illegal emissions software in a landmark decision in the "Dieselgate" scandal.

World News // 9 hours ago
Saudi Arabia to ease some restrictions this week, the rest in June
May 26 (UPI) -- Officials in Saudi Arabia said Tuesday they will relax coronavirus-related curfews and other restrictions for most of the country this week and they will be fully lifted nationwide next month. 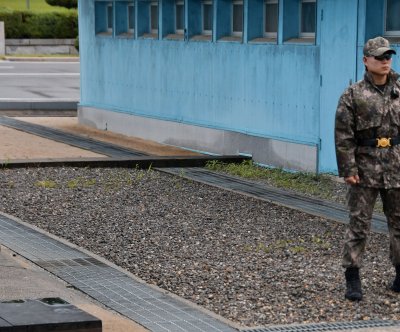 World News // 12 hours ago
UNC: Unclear whether North Korean gunfire across DMZ was accidental
SEOUL, May 26 (UPI) -- The United Nations Command announced Tuesday that it had finished its investigation into a gunfire exchange inside the DMZ in early May and was not able to determine if North Korea's initial shots were accidental.