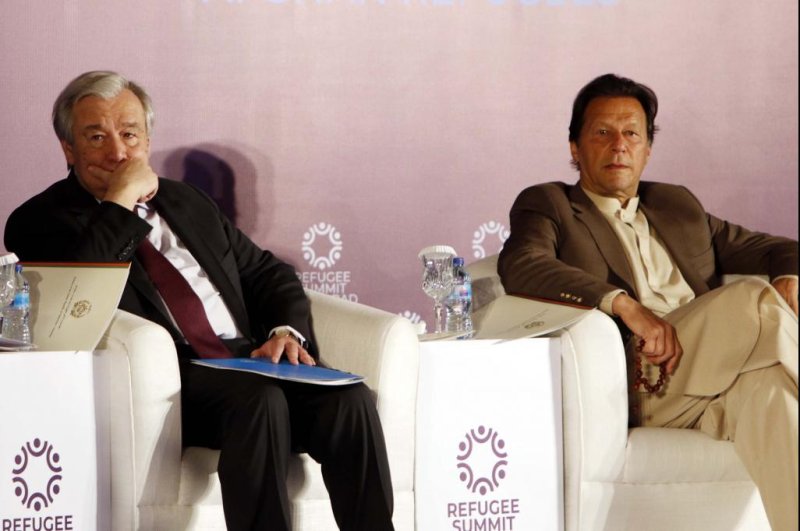 Guterres made the remarks at the Refugee Summit in Islamabad, Pakistan, during an official visit. Monday, he met with Pakistani Prime Minister Imran Khan at the event.

Hindu-dominated India and Muslim-majority Pakistan, which administers different regions of the long-disputed Kashmir region, have come under increased scrutiny in recent months after the Indian government removed the autonomy on security grounds.

Adding to the tensions is a new controversial rule that offers a path to Indian citizenship for refugees from three neighboring nations, as long as they aren't Muslim.

"I am deeply concerned about the increase in tensions that we have witnessed last year," Guterres said Sunday. "I have repeatedly stressed the importance of exercising maximum restraint and taking steps to de-escalate, both militarily and verbally, while reiterating my offer to exercise my good offices, should both sides ask."

Pakistan has welcomed U.N. involvement and U.S. President Donald Trump has also offered to mediate, a prospect rejected by India.

Khan said Monday he wants more U.N. involvement, and warned that tensions with India will likely only grow.

"If the United Nations does not play its part, this could become one of the flashpoints in the world," Khan said. "Not to alarm you, but prevention is better than cure."

"Diplomacy and dialogue remain the only tools that guarantee peace and stability, with solutions in accordance with the Charter of the United Nations and the resolutions of the Security Council," he said.

World News // 6 hours ago
China, India agree to diplomatic hotline after deadly clash
Feb. 26 (UPI) -- China and India agreed to establish a hotline between their top diplomats, but reports indicate differing views prevailed over the issue of disputed areas.