Nov. 15 (UPI) -- North Korea derided former U.S. Vice President Joe Biden in a statement on KCNA on Thursday, describing the Democratic presidential candidate as a "mad dog" that must be subdued and "beaten with a stick."

In a strongly worded statement from Pyongyang's state-controlled news agency, Biden, who has been leading the Democratic race to challenge President Donald Trump, was called a dog, as well as a "crazy old madman."

"A mad dog, so drunk on his lust for power that he cannot tell whether snakes or fecal matter is coming out of his mouth, has had another convulsion," KCNA said in the statement published Thursday.

Earlier this week, the Biden campaign released a new ad focused on his foreign policy experience and criticized Trump's approach.

"We live in the most dangerous moment in a generation. Our world, set on edge by an erratic, unstable president. Dictators and tyrants are praised, our allies, pushed aside," the ad stated, while showing photos of Trump meeting with Kim and Russia's Vladimir Putin.

On Monday during a Veterans Day town hall in Oskaloosa, Iowa, Biden said Trump made mistakes by being friendly with dictators.

"Right now, we don't really have a foreign policy. I'm not being facetious -- we don't have a foreign policy. We are embracing thugs like Putin and Kim Jong Un. This president's talking about love letters with a butcher. This guy had his uncle's brains blown out sitting across the table, his brother assassinated in an airport. This is a guy who has virtually no social redeeming value," Biden said.

On Thursday, North Korea accused Biden of suffering from Alzheimer's disease and that anyone who tries to tamper with "our highest dignity" will not escape "ruthless punishment." 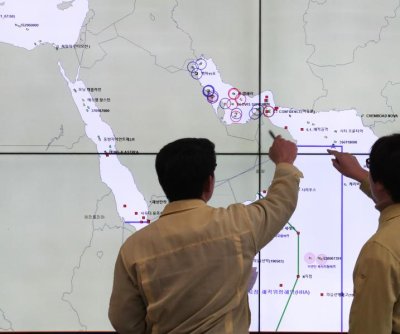