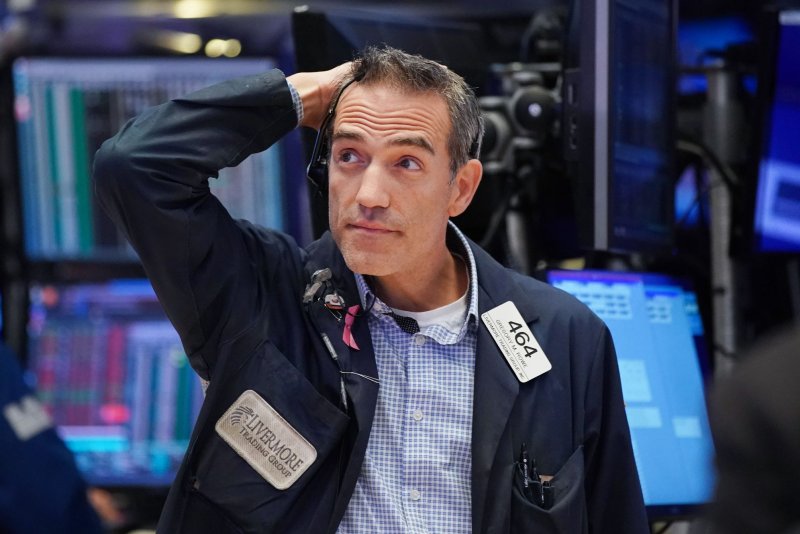 A trader on the the floor of the New York Stock Exchange reacts after the Dow lost several hundred points on August 23, as a direct result of the U.S.-China trade impasse. File Photo by John Angelillo/UPI | License Photo

Oct. 15 (UPI) -- Repercussions from the stagnated U.S.-China trade conflict has prompted the International Monetary Fund to again cut its U.S. growth outlook for the rest of the year Tuesday, to the lowest growth level since the financial crisis a decade ago.

The IMF said in its outlook it projects the U.S. economic growth to be at 3 percent by the end of 2019 -- a revision down from 3.2 percent in July. IMF chief economist Gita Gopinath said tariffs and restrictions between Washington and Beijing are "at the heart" of the revision.

For next year, Gopinath forecast U.S. GDP growth of 3.4 percent, a decline of 0.1 percent from July's outlook.

"The global economy is in a synchronized slowdown," she said in a statement, noting the predicted recovery in 2020 will be "modest."

"However, that remains precarious," Gopinath added. "This could derail an already fragile recovery that we're projecting for emerging markets and developing economies, including the euro area."

"Monetary policy should remain accomodative, but it cannot be the only game in town," she said. "Fiscal policy also should play a role especially in countries that have fiscal space."

RELATED Chinese delegation expected in U.S. for 13th round of trade talks

Chinese and U.S. negotiators have yet to come to an agreement to end the standoff, which began more than a year ago and has since grown to include punitive taxes on billions of dollars worth of U.S. and Chinese products. The next set of sanctions against Beijing take effect in December.