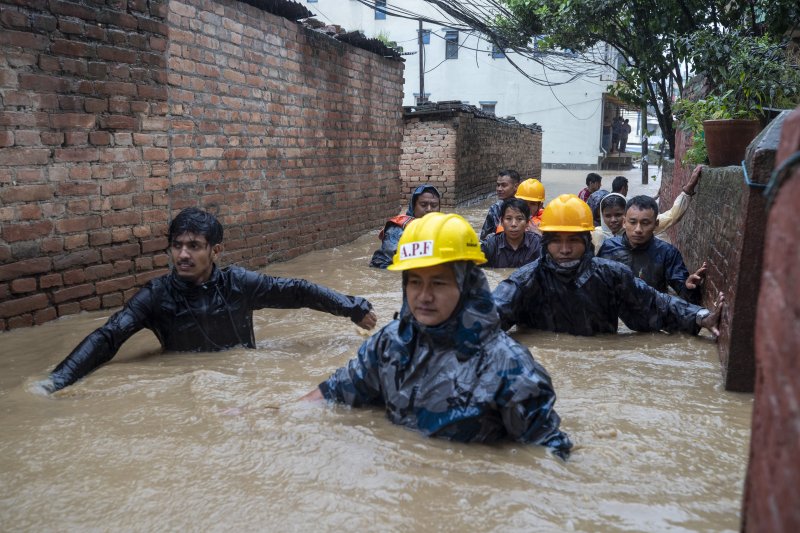 July 15 (UPI) -- Landslides and flooding triggered by seasonal monsoon rains have killed at least 67 people in Nepal, 25 people in India and 14 in Bangladesh, authorities said.

In Nepal, police said Monday that at least 67 people have been killed with another 43 injured due to the torrents of rainfall that are expected to continue throughout the next few days.

Another 30 people were still missing and 1,446 people were reported rescued, the police force said on Twitter.

In India, more than 5 million people have been affected by flooding in the states of Bihar and Assam, the two worst hit in the country, according to Rapid Response, one of the nation's disaster response agencies.

"Assam is reeling under devastating floods," the organization said in a tweet asking for donations. "There is urgent need for food, water and dry ration on the ground."

Rapid Response Chief Executive Mohamad Farukh said at least 25 people had died in India and the number could significantly increase over the coming days, The New York Times reported.

"It's getting worse day by day because of continuous rains and overflowing rivers," he said.

The Indian government said it had positioned rescue teams in vulnerable areas and as of Saturday rescued about 750 people.

The Indian National Congress said it was "deeply anguished" by the situation in Assam and was praying for the victims and their families.

"We urge all Congress workers in the state to help wherever possible," it said via Twitter.

In Bangladesh, at least 14 people have died in seven districts while over 60,000 families in low-lying areas have been marooned in their homes or shelters, Bangladesh Red Crescent Society said.

"The current flood situation is likely to worsen in the coming days, as all major rivers in the affected districts are flowing about the danger mark with a rising trend," it said in a press release.

Care International said low-lying areas in 16 districts have been flooded throughout the country with four at risk of landslides.

The monsoon season, which lasts from June to September, while bringing rain to areas that experience droughts also causes severe damage throughout South Asia.

World News // 15 hours ago
Biden anticipates 'long conversation' with Putin about Russia's Ukraine plans
Dec. 4 (UPI) -- President Joe Biden said he is expecting a "long discussion" about the threat of an offensive against Ukraine during an upcoming video conference with Russian President Vladimir Putin.