He was granted citizenship Dec. 12 after applying for it months earlier.

Espinosa said Assange would not leave the embassy without security guarantees because he has received threats on his life. She said the Ecuadorean government is seeking a "dignified and just" solution in his case with the British government

Assange was granted political asylum in 2012 to avoid extradition to Sweden over rape allegations. The investigation was dropped but Assange, 46, refused to leave, claiming he fears he might be extradited to the United States over a bail breach.

A spokesman for Britain's Foreign and Commonwealth Office said despite the government of Ecuador requesting diplomatic status for Assange, the Britain government did not grant that request, "nor are we in talks with Ecuador on this matter. ... Ecuador knows that the way to resolve this issue is for Julian Assange to leave the embassy to face justice."

Of four sex-related crimes allegations against Assange, three -- unlawful coercion and two counts of sexual molestation -- expired in 2015 due to statutes of limitations under Swedish law, while the investigation for the remaining rape allegation, which had an expiration date of 2020, was dropped in May.

Assange gained international recognition for publishing thousands of classified U.S. documents through his website, WikiLeaks. Ecuador granted him political asylum in 2012 under the authority of the 1951 Refugee Convention.

World News // 3 hours ago
Populist governor in South Korea seen leading in presidential poll
April 22 (UPI) -- A politician once dubbed the Bernie Sanders of South Korea is holding a slight lead in a new poll ahead of the country's presidential election in 2022. 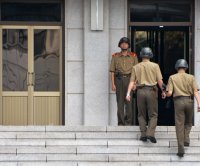