The International Committee of the Red Cross said Tuesday a least 234 people have been killed in Sanaa, Yemen, over the past four days in fighting between Shia Houthi rebels and forces loyal to slain former President Ali Abdullah Saleh. Photo courtesy of ICRC/Twitter

Dec. 5 (UPI) -- Armed clashes in Sanaa, Yemen, have killed 234 people in the past four days, the International Committee of the Red Cross reported Tuesday.

He said 400 people have been wounded, including 383 severely, in fighting between Shia Houthi rebels and forces loyal to former President Ali Abdullah Saleh, who was killed Monday.

"Our ... teams are now doing all they can to supply hospitals with medicines, surgical materials and fuel," Mardini tweeted.

He wrote that ICRC-supported hospitals have received nearly 70 percent of the casualties.

Mardini earlier posted that "thousands" were trapped in their homes without food or water.

"Little aid has been allowed into the country - millions remain in desperate need. * Medicines and fuel running dangerously low - more clinics closing every day," he posted.

He urged both sides to allow for the delivery of humanitarian aid and avoid harming civilians.

"We hope to donate fuel to the main hospitals because they depend on generators and they are in urgent need of fuel because their stocks are being depleted at a time of the recent increase in the number of casualties," Jaquemet said.

She said her organization had 199 staff in Sanaa on Monday after it "relocated" 13 international staff to Djibouti.

On Monday, Houthi militiamen bombed Saleh's home, sources from both sides of the conflict confirmed.

Saleh, who stepped down as president in 2011, renounced his alliance with the Houthi rebels.

World News // 19 minutes ago
Shortages increase suffering of Lebanon's exhausted population
BEIRUT, Lebanon, Aug. 2 (UPI) -- A "typical" day in Lebanon now starts with finding an open gas station, hunting for medications or baby milk, struggling with power cuts and praying against getting sick -- or simply to survive the day.

World News // 11 hours ago
Taliban threatening capture of Afghanistan provincial capital
Aug. 1 (UPI) -- The Taliban made advances on the key provincial capital of Lashkar Gah on Sunday, escalating its push to claim major cities in the midst of U.S. withdrawal from the country. 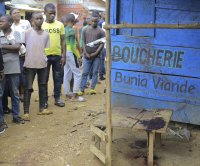