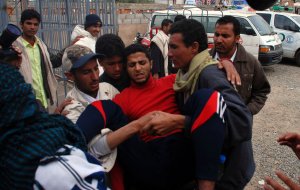 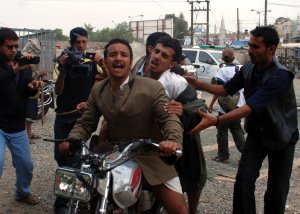 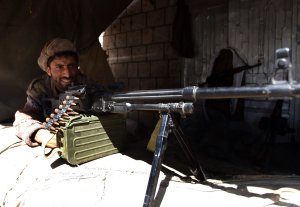 World News // 4 years ago
Airstrike kills more than 20 at Yemen wedding
An airstrike on a wedding party in northern Yemen killed at least 20 people, including the bride, Houthi rebels said.

World News // 4 years ago
Russia withdraws diplomats from Yemen
All of Russia's diplomatic staff has left Yemen due to deadly clashes in the capital of Sanaa, Russian Foreign Ministry spokeswoman Maria Zakharova said.

World News // 4 years ago
Red Cross: At least 234 dead in Yemen clashes
Armed clashes in Sanaa, Yemen, have killed 234 people in the past four days, the International Committee of the Red Cross reported Tuesday.

We must discuss all the available data, all the events in Yemen, and how to get our country out of the crisis -- the crisis which was fabricated by some political forces to reach power

These are excellent aircraft. We have had them for a long time, and several years ago we brought them to Russia and carried out their modernization program

We are not against participation, we are for participation with all political powers, whether they are in opposition or ruling, but in the light of a program which the people agree upon

We have deployed all possible efforts in combating terrorism, achieving tangible progress, and we will keep on supporting international efforts in that regard

Saleh was born in the town of al-Ahmar, in the Al-Ahmar family — the ruling family of the Hashid tribal confederacy. Saleh is a Zaydi Shia Muslim. He is a "non-Hashimi" Zaydi (not a direct descendant of the Islamic prophet Muhammad's grandfather), and would not have been eligible to rule under the Zaydi Mutawakkilite Kingdom of Yemen that ruled the country until 1962.

Saleh obtained less than an elementary school education. He joined the North Yemeni armed forces in 1958 and the North Yemen Military Academy in 1960, and became a corporal. Three years later, he was commissioned from the ranks as a second lieutenant. In 1977, the President of North Yemen, Ahmed bin Hussein al-Ghashmi, appointed him as military governor of Ta'izz.

FULL ARTICLE AT WIKIPEDIA.ORG
This article is licensed under the GNU Free Documentation License.
It uses material from the Wikipedia article "Ali Abdullah Saleh."