All children at collapsed Mexican school accounted for 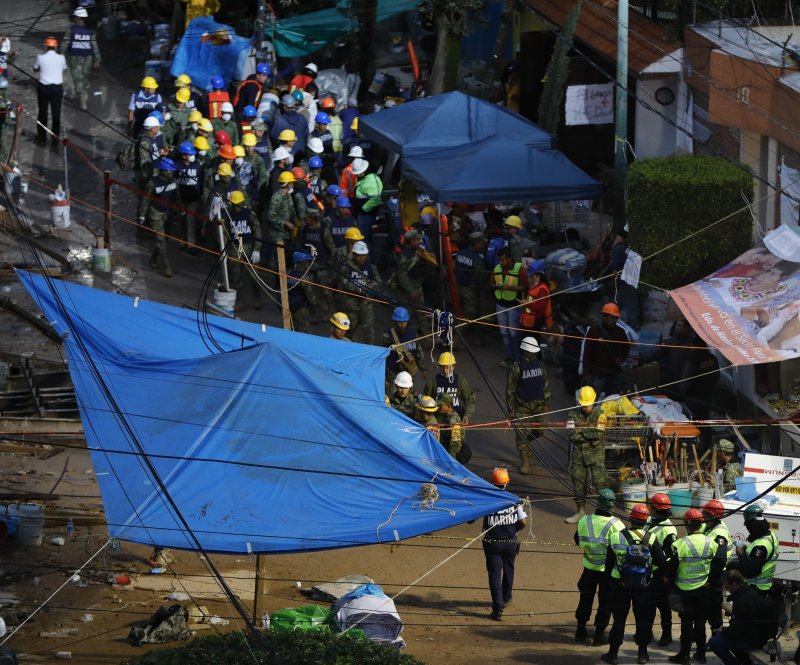 Rescue services and volunteers search for victims Thursday under the debris of the school that collapsed in the 7.1-magnitude earthquake that struck Mexico City on Tuesday. Photo by Jose Mendez/EPA-EFE

Sept. 21 (UPI) -- All children who were in a schoolhouse in Mexico City when it collapsed during an earthquake earlier this week have been accounted for, a Mexican navy official said Thursday.

Rescuers had been searching the Colegio Enrique Rebsamen school since shortly after the 7.1-magnitude earthquake struck on Tuesday afternoon. Adm. Jose Luis Vergara told Foro TV on Thursday that they believed at least one girl was trapped alive in the rubble.

But later Thursday, Angel Enrique Sarmiento, sub-secretary of the Mexican navy, said there were no children remaining in the rubble.

"We are certain that all the children either passed away, are in local hospitals, or are safe and sound in their houses," he told reporters.

Nineteen children and six adults died in the crushed school.

Sarmiento said he's unsure how people came to believe a 12-year-old girl was trapped, but authorities now believe an adult woman is alive under the rubble. Rescuers are attempting to extricate her.

"We want to stress, this story about a girl whose name was out in [news casts], we've never had any knowledge of this version," Sarmiento said, as quoted by BuzzFeed.

At least 273 people were killed -- a toll that rose slightly from Tuesday to Wednesday -- and scores more are injured across central Mexico.

Mexican President Enrique Pena Nieto said late Wednesday night the top priority is finding survivors. He said more than 50 people have been rescued. The government has set up dozens of shelters for people whose homes were destroyed or damaged.

Dozens of buildings have been flattened by the earthquake around central Mexico. It struck Tuesday, on the 32nd anniversary of a magnitude-7 quake that killed thousands in and around Mexico City in 1985.

As Mexico grapples with the aftermath of a generational earthquake, the U.S. Department of Defense said dozens of disaster recovery workers who are part of the USAID program were dispatched to Mexico City to help with the recovery. Those workers include members of the Los Angeles County Fire Department who are specially trained for quake response efforts.

The fact the country was rocked by two earthquakes in 11 days has seismologists puzzled. The initial tremor, a magnitude-8.1, was followed by an apparently unrelated quake in the same tectonic region, but their varying depths and distance led scientists to conclude the first would have had little to no effect on what caused the second.

Though the second quake was less powerful by a factor of 10, the epicenter's shallow depth of 50 kilometers combined with the geographic characteristics of the area are what made it so much more devastating.

"The combination of the earthquake's location, radiated seismic energy, and the very foundations of Mexico City -- thick, loose soils that behave like a bowl of jelly during earthquakes -- created the conditions for devastation," Steve Hicks, a seismologist with the University of Southampton told The Guardian.

In some towns outside the capital city, thousands of people were left homeless. Jojutla, in Morelos state, was particularly hard hit.

"Jojutla is damaged badly, but there are communities that have suffered the same or worse," said Óscar Cruz, a spokesman with the local Catholic diocese, told The Guardian. "What's tragic is that the damage is worst in the poorest pueblos."

The state governor of Puebla said 1,700 homes there were declared uninhabitable, and nearly every structure in the town of Metepec sustained damage.

World News // 10 hours ago
Somali government says it has ousted Islamist militia from town
Oct. 23 (UPI) -- A regional government in Somalia says it's in control of a town in the central part of the country after a clash with an Islamist militia.

World News // 11 hours ago
Pakistani police clash with banned Islamist group seeking release of its leader
Oct. 23 (UPI) -- Supporters of a banned Islamist party in Pakistan have clashed with police and disrupted traffic during a march to the country's capital.

World News // 15 hours ago
Hurricane Rick swirls to life, expected to strengthen and target Mexico
Mexico's southwestern Pacific coast will need to remain on high alert through the weekend as newly formed Hurricane Rick has churned up in the warm tropical waters of the eastern Pacific Ocean.