Bill Gates, shown here recieving the Presidential Medal of Freedom on November 22, announced the involvement of his foundation in a $460 million initiative to prepare vaccines which could reduce the global impact of epidemics. The announcwement of the Coalition for Epidemic Preparedness Initiative was made in Davos, Switzerland. File Photo by Pat Benic/UPI | License Photo

The Coalition for Epidemic Preparedness Initiative was unveiled Wednesday at the global conference. Its initial investment comes from the Bill and Melinda Gates Foundation, the medical research charity Wellstone and the governments of Germany, India and Norway. Its goal is to develop vaccines that could be quickly deployed to overtake epidemics, such as the Zika and Ebola viruses, before they become international health emergencies.

The plan is to create vaccines using genetic sequences of pathogens to identify antibodies against infections, using the "plug-and-play" model of computer interfaces, and is meant to be a means of preparation prior to outbreaks.

"The idea is to take a new way of building vaccines that could let us develop in less than a year a novel vaccine, called DNA/RNA vaccines. Right now it takes years to build a new vaccine. But the scientific idea of these new platforms could radically change that so that a lot of the steps are sitting there ready: the factory piece, understanding the regulatory piece. And you just have to plug in some information and do some quick safety profiles and then you can get into manufacturing quite rapidly," Gates told CBS News.

In Davos, CEPI illustrated its plan by showing that over 2,000 lives could have been saved if introduction of a vaccine to fight Western Africa's Ebola outbreak during nine months in 2014 and 2015 took only six weeks to develop.

The $460 million investment is about half of the $1 billion CEPI seeks for its first year of operation. Fundraising is expected to be completed by the end of 2017.

World News // 5 hours ago
At least 100 dead after Beirut explosions; 300,000 homeless
Aug. 5 (UPI) -- Authorities in Beirut have increased the death count from the devastating explosions on Tuesday to at least 100, while one official said Wednesday it could cost Lebanon's capital about $5 billion to recover.

World News // 8 hours ago
Interpol warns of 'alarming rate' of cyberattacks amid pandemic
Aug. 5 (UPI) -- Interpol said it has observed an "alarming rate" of cyberattacks targeting governments and corporations amid the coronavirus pandemic as employees around the world are forced to work remotely due to COVID-19. 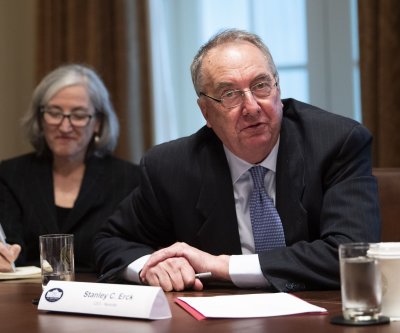 World News // 22 hours ago
Breastfeeding benefits outweigh any COVID-19 risk, WHO says
Aug. 4 (UPI) -- The benefits of breastfeeding far outweigh risk of COVID-19 infection from it, which is negligible and has never been documented, the World Health Organization said Tuesday.

World News // 23 hours ago
Locusts plunder crops in southwest China
Aug. 4 (UPI) -- Swarms of locusts have destroyed crops in China's southwestern Yunnan Province, as the country braces for more flooding in other regions.