While Duterte is known for exaggeration in his speeches, the comment could lead to a lawsuit and then impeachment proceedings, a Philippine senator said. 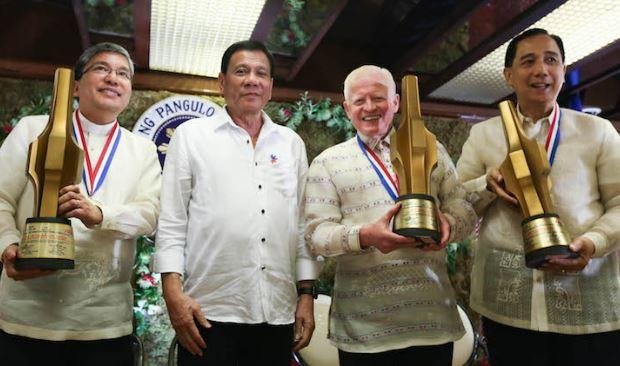 Philippines President Rodrigo Duterte, second from left, poses with winners of "The Outstanding Filipino 2016" awards in Manila on Monday. Hours later, he admitted to a business form he personally killed drug suspects while mayor of Davao City, an action a Philippines senator said could leave Duterte open to impeachment. Photo courtesy of Philippines Presidential Office.

Duterte made the comment while speaking to business leaders Monday in Malacañang Palace, the presidential residence in Manila.

"In Davao I used to do it personally. Just to show to [the police] that if I can do it, why can't you. And I'd go around in Davao with a motorcycle, with a big bike, around, and I would just patrol the streets, looking for trouble also. I was really looking for a confrontation so I could kill," he said.

As mayor of Davao City from 1988-98, 2001-10 and 2013-16 -- Duterte held other elected positions between mayoral terms -- he earned a reputation for reducing crime as well as supporting so-called death squads. Similarly, a campaign against drug dealers and abusers, started after Duterte was elected president in May, has led to the deaths of nearly 6,000 people, with police, vigilantes and mercenaries responsible for the extrajudicial killings.

RELATED Philippines might not let U.S. use its bases to patrol South China Sea

While Duterte, a lawyer, is known for blustering and exaggerated comments, as well as going off-topic from prepared speeches, his admission could lead to impeachment, said Sen. Richard Gordon, a member of the Philippine Senate's majority bloc.

"If he really said that, then maybe he has a reason to utter those words and if someone would want to sue him, we will have to conduct impeachment proceedings. When he says that, he's opening himself up," Gordon said.

Some human rights activists have suggested Duterte's open support for vigilantism and a shoot-to-kill policy for police could lead to crimes against humanity charges in an international court, the BBC reported Wednesday.

In 2015 Duterte said he personally killed three men accused of murder and rape. Hours before his remarks before the business forum, though, he noted his actions are motivated by "Love and all of these things that I'm doing really, because of love of my country. I'm not trying to be cruel," while presenting awards to three people at "The Outstanding Filipino 2016" ceremony at the presidential palace.

World News // 10 hours ago
Hyundai acknowledges coolant leak in Ioniq 5
SEOUL, June 18 (UPI) -- Hyundai is under fire from customer complaints that the Ioniq 5 leaks coolant within the first months of usage.

World News // 14 hours ago
European Union reopens to American travelers
June 18 (UPI) -- The European Council on Friday announced that countries in the European Union could gradually lift travel restrictions on several nations, including the United States.