Cuba may deploy troops in Syria to aid Russia's efforts

MIAMI, Oct. 15 (UPI) -- The head of Cuba's military recently visited Syria with soldiers, lending to speculation that Cuba may deploy ground troops in the conflict recently joined by Russia.

The University of Miami's Institute for Cuban and Cuban-American Studies on Tuesday revealed that Gen. Leopoldo Cintra Frias, minister of the Cuban Revolutionary Armed Forces, visited Syria with a group of Cuban military personnel in support of Syrian President Bashar al-Assad.

"The Cuban military contingent will be primarily deployed in Syria manning Russian tanks provided to Assad by the Russians," the institute said in a statement. "It will also operate as a military force against ISIS and other opponents of the Assad regime."

An anonymous U.S. official confirmed to Fox News on Wednesday that Cuban paramilitary and special forces units were on the ground in Syria. The source also said Cuban troops may have trained in Russia before arriving in Syria on Russian planes.

More than 250,000 people have died and more than 4 million have been displaced by the Syrian civil war. A U.S.-led coalition has carried out airstrikes against Islamic State targets in Syria and Iraq for more than a year.

The Institute for Cuban and Cuban-American Studies said Cuba's involvement in the Syrian civil war in order to aid Russia has roots seen in history.

"This is not the first time that Cuban military personnel have been involved in international military missions in support of Russian objectives. In the 1970s, Cuba sent several hundred thousand troops to Angola and other African countries while the Soviets provided weapons to support African leaders attempting to gain power in their countries," the institute added. "In 1973, Cuba sent troops to Syria to support them in the Yom Kippur War against Israel. Cuba also sent military officers to observe Israeli military tactics and to advise Assad."

World News // 4 hours ago
IMF: Gap between rich, poor widens due to vaccine inequity
July 27 (UPI) -- The gap between rich and poor countries' recovery from the pandemic has widened, the International Monetary Fund warned Tuesday.

World News // 16 hours ago
North and South Korea restore severed hotlines after a year
SEOUL, July 27 (UPI) -- Hotlines that were severed last in June of last year by North Korea were turned back on Tuesday, restoring communications between the two Koreas in a move both sides called a positive step in improving relations. 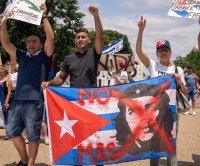 World News // 20 hours ago
Cuba's Paris embassy hit with gas bomb; blames U.S. for inciting violence
July 27 (UPI) -- The Cuban Embassy in France late Monday said it was the victim of a Molotov cocktail attack that it blamed the United States for inciting.
Advertisement