Sept. 26 (UPI) -- More than 2.3 million Venezuelans -- roughly 7 percent of the entire population -- have fled the country's political and economic crisis since 2014, the largest human displacement in Latin America's history.

Earlier this year, as many as 5,000 Venezuelans crossed the border every day, most of them seeking safety in poor cities and towns in Brazil, Chile, Colombia, Ecuador and Peru.

Impromptu refugee camps are springing up in towns across South America, fueling anxieties that tent cities may become permanent ghettos.

Latin America is not the only region where cities are struggling to cope with mass migration -- populations that would previously have landed in rural refugee camps.

Urban refugees are a growing phenomenon.

According to a recent World Refugee Council report, which I co-authored, hundreds of cities worldwide are overwhelmed by an influx of people fleeing conflict in Syria, Myanmar, Sudan and beyond.

Ever since the mass global displacement of the World War II -- and particularly after Nigeria's 1967 Biafra civil war -- international aid organizations have primarily housed refugees in rural camps, where they are provided food, shelter, legal processing, education and medical care.

If given the option, however, refugees typically prefer to resettle in cities. There, they stand a better chance at rebuilding their lives.

But when too many refugees arrive at once, they can create a host of challenges for city officials. Refugees often arrive with little more than the clothing on their backs urgently needing housing, food, education and skills training.

Yet neither the United Nation's 1951 Convention on Refugees nor its 1967 supplementary protocol even references urban refugees, much less defines the specific roles and responsibilities of city officials in dealing with migrants.

Though the current strategic plan of the U.N.'s refugee agency acknowledges that more refugees are moving to cities, it offers few recommendations for helping cities better serve them.

Today, about 17.5 million people -- about 70 percent of all refugees worldwide, live in urban areas, according to the United Nations High Commissioner for Refugees.

The U.N.'s refugee agency issued its first official policy statement on urban refugees in 1997. Concerned that increasing municipal migrant services might pull refugees away from remote camps and into cities, it promoted a model of "self-reliance" to keep them at bay.

In practice, that means urban refugees and other migrants mostly fend for themselves. Some can afford to rent apartments. Others stay with family and friends. Many end up homeless and destitute.

Some cities have taken a more active approach to refugee and migrant services -- though not always successfully.

In Calais, France, thousands of Middle Eastern and North African migrants and refugees were directed to a camp located on a former landfill, where they were served by local charities and aid organizations.

But the "Calais Jungle," as the squalid camp was known, lacked proper sanitation, and disease spread quickly. More than 6,400 residents were evacuated in 2016.

The patchwork response to new arrivals -- and the high visibility of migrants who are "campified" on the streets -- is fueling public discontent from residents who view refugees as a drain on scarce city resources.

Politics is one reason that the U.N. has been slow to address the urban refugee crisis. It has faced immense pressure from member countries to continue building and administering rural camps rather than help refugees integrate and resettle in cities.

Right-wing politicians everywhere from Uganda and Nepal to the United States and Colombia portray displaced people as a national security threat.

But things may be starting to change.

In 2015, following a rush of refugees from the Mideast and North Africa, a network of foundations and 50 European cities -- including Barcelona, Frankfurt and Rotterdam -- established "Solidarity Cities." They are working together to deliver housing and other immediate services to new arrivals and, over time, integrate them into city life.

Last year, the International Organization for Migration and the umbrella group United Cities and Local Governments organized 150 cities around the globe to sign a declaration on the rights of urban refugees.

Asserting that refugees can "bring significant social, economic and cultural contributions to urban development," they called on international organizations and national governments to politically and financially support cities in caring for migrant populations.

In the United States, many cities have responded to President Donald Trump's immigration crackdown by publicly declaring themselves "welcoming cities" for refugees and asylum seekers.

Another 500 American cities -- including Chicago, Los Angeles and New York have gone further -- establishing themselves as "sanctuaries" where undocumented migrants and refugees may seek protection from federal immigration authorities.

So far, Venezuelan migrants have experienced no such welcome in South America.

In Brazil, which has received roughly 56,000 Venezuelan migrants and asylum seekers since 2015, cities have proven grievously unprepared to receive them.

Only a few hundred Venezuelans have sought asylum in São Paulo, Brazil's biggest city. Yet this wealthy metropolis of 21 million is struggling to provide them with basic services like employment, food and other amenities.

In smaller Brazilian border towns, the influx is overwhelming. Officials have appealed to the military and international aid groups to set up emergency migrant shelters.

Boa Vista, which lies 125 miles from Venezuela, normally has 266,000 residents. Venezuelans have swelled its population by 10 percent.

According to Roraima state authorities, check-ups at public clinics increased 6,500 percent last year as Venezuelans made use of Brazil's public health system. Many asylum seekers arrive needing treatment for dehydration, malnutrition and disease.

Crime is also up in Roraima, 132 percent since 2015, an increase officials have attributed to migrants.

Anti-migrant sentiment on the Brazilian frontier is growing.

Local officials in some border cities now require passports and special permits to access government services. Others have set up separate migrant-only bathrooms.

An angry mob of Brazilians chased 50 Venezuelans out of nearby Mucajai in March.

That month, a Venezuelan migrant accused of robbery was killed in the Brazilian city of Paracaima. Another Venezuelan was stabbed and shot to death in Rorainópolis, a town in Roraima state.

The Brazilian military was even deployed to the border to keep the peace.

Cities have a comparative advantage

Despite these challenges, I see cities as comparatively well-positioned to assist refugees.

But poorer cities like those in South America will need both national and international economic support to meet the needs of their newest residents.

Cities cannot change national laws to make refugees more welcome. But with a little help -- and a lot less hindrance -- they can better provide the basic protection that migrants need. 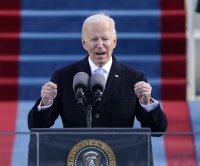 Voices // 4 days ago
Full text: President Joe Biden's inaugural address, a call for unity
Jan. 20 (UPI) -- Joe Biden was sworn in as the 46th U.S. president on Wednesday, calling for unity as the nation faces severe crises, including the COVID-19 pandemic and political divisions. Read the full text of his speech.