Korea's Olympic moment: Can it lead to peace? 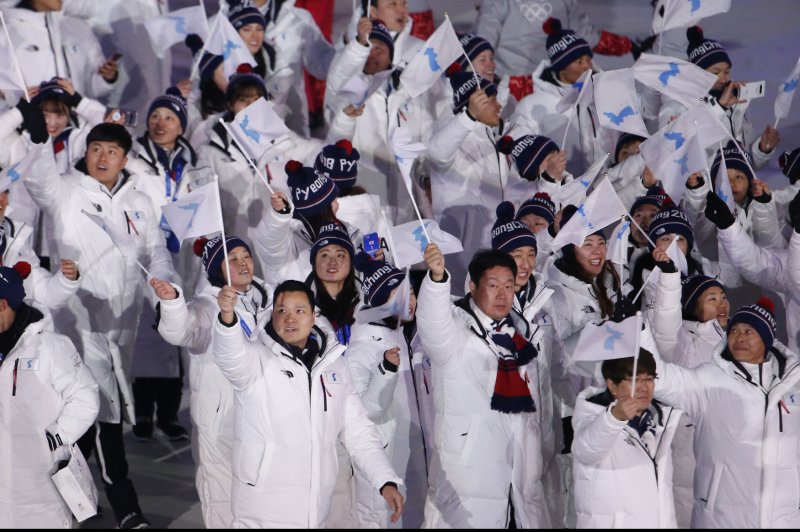 North and South Korean athletes walk together under one flag during the opening ceremony at the Pyeongchang 2018 Winter Olympics on Friday. Photo by Matt Healey/UPI | License Photo

Feb. 12 (UPI) -- The Pyeongchang Winter Olympics in South Korea provide cause for celebration -- and for sober reflection. They have brought a pause to the escalating cycle of missile tests, nuclear threat and military counter-threat that conjure the specter of war.

The participation of North Korean athletes in the Olympics, and the start of high-level talks between representatives of the North and South Korean governments, have raised hopes among many for a peaceful path forward. Almost everyone wants to avoid conflict. But we should not let the natural wish for peace blind us to the realities of what it will take to achieve it.

North and South Korean athletes have marched together at Olympics before. The leaders of South and North Korea have signed agreements with concrete action points -- points that were never implemented and have not led to peace. The Korean Peninsula, home to people who are the same culturally and ethnically, remains divided.

The Pyeongchang Games are leading Koreans to reflect on their past, on how far they have come, and the path they must navigate in the future to become one people once more.

Thirty years ago, South Korea hosted the 1988 Summer Olympics, an event that marked its emergence as a modern nation of prosperity and democracy. It was an historic moment, the first time since 1976 that athletes from both the United States and Soviet Union participated in the Olympics together -- significant for several reasons.

At that time, the Soviet Union was in a state of transition under Mikhail Gorbachev that was to have a dramatic impact on Northeast Asia. Eventually, the Soviet Union and China sought better relations with South Korea and withdrew their objections to granting it U.N. membership. This was a bitter blow to Pyongyang, which maintained that there was only one Korea and the DPRK was its sole legitimate representative.

A further blow to North Korea, though never publicly recognized, was the withdrawal of Soviet subsidies on which it depended. In response, the Kim family increased their totalitarian controls and replaced lost revenue through a variety of illicit activities. The subsequent economic decline in the North hobbled their ability to match the conventional military capability of the flourishing South. The North Korean nuclear program has been their asymmetric response to the South's conventional superiority.

North Korea today is a vestige of the Cold War, and a major source of instability in the region and world. Addressing these issues on the Korean Peninsula requires a clear vision for the endgame and a long-term strategy for getting there. Responding piecemeal to every threat or diplomatic overture from Kim Jong Un is not a coherent policy.

The Korean people have a common aspiration for one Korea -- as expressed in the constitutions of both North and South. Unification of the Korean people, by peaceful means, must be the goal. The question is: What will be the nature of a unified Korea? What principles will govern it?

The answer may be found in a chapter of Korean history that preceded the current division. On March 1, 1919, while Korea was under Japanese colonial rule, the Sam-Il independence movement swept the peninsula, with peaceful rallies proclaiming the Korean Declaration of Independence, drawing some 2 million people.

The vision they affirmed was of a united, independent, and democratic nation. They drew upon the ancient Korean ideal of hongik ingan -- living for the benefit of all humanity -- as a guiding principle that had long inspired Korean development.

Their aspirations are yet to be fulfilled. The division of the peninsula at the end of WWII was intended as a temporary administrative measure. Despite resolutions of the newly established UN General Assembly calling for Korea to be "united, independent and democratic," the free elections promised were never held, and in 1948 separate governments were established in the North and South.

The dream of a free and unified nation has been deferred for more than 100 years. Next year, 2019, is the centenary of the 1919 independence movement. This is an opportunity to honor the vision and courage of the independence pioneers and to recommit to the goals they hoped to achieve.

The Pyeongchang Olympics have provided the chance for dialogue between South and North, but real progress must involve not merely a unified Korea, but one that fulfills the long-held Korean dream -- an independent and democratic Korea.

The Sam-Il Movement was a uniquely Korean-led, peaceful and grass-roots expression of Korea's dream. In his 2014 book Korean Dream, author Hyun Jin Preston Moon, founder and chairman of the Global Peace Foundation, proposes that in the current Korean dilemma, a new Sam-il Movement is needed. He argues that the most enduring historical ideal -- hongik ingan can become the core value upon which to base a new Korea.

It creates common ground for consensus among Korean people throughout the peninsula and around the world. From this, an overarching framework for engagement with the North can be developed to deal with all the interim issues on the path to unification.

Michael Marshall is editor emeritus of United Press International. He writes and speaks on issues pertaining to the Korean Peninsula and assisted with research for the book, "Korean Dream."