Blacklisting Iran's IRGC does not mean another U.S.-led war 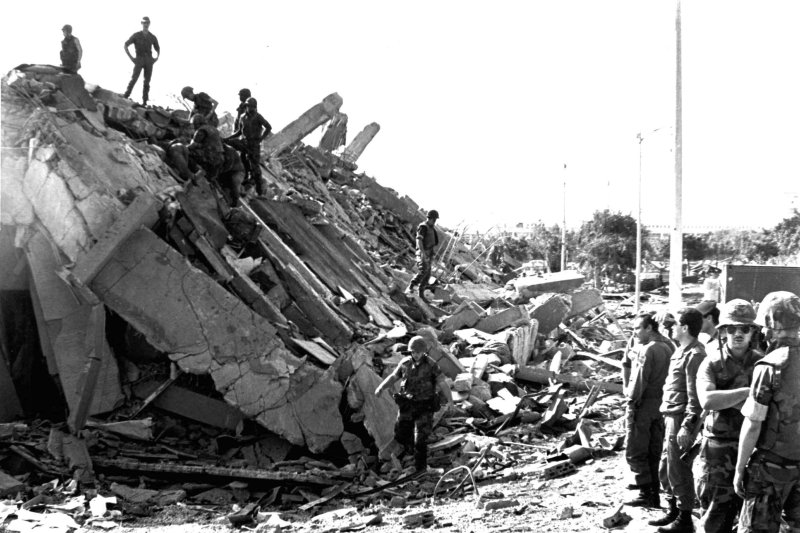 Service members pick through the rubble following the bombing of the U.S. Marine Corps barracks in Beirut, Lebanon on Oct. 23, 1983. Iran and Hezbollah masterminded the attack. File Photo by U.S. Marine Corps

March 6 (UPI) -- This week, together with International Committee in Search of Justice, we are publishing an extensive study about the role of Iran's Islamic Revolutionary Guards Corps in the Middle East and its meddling and fomenting of terrorism in 14 Muslim countries in the region.

Following the Obama tenure that allowed Iran to tear the Middle East apart and engulf it in flames, Tehran is now faced with a new administration in the White House that has markedly different intentions. The new U.S. administration is floating a proposal to blacklist the IRGC as a foreign terrorist organization.

And suddenly we are witnessing a shrill chorus from known members of the pro-Iranian appeasement lobby predicting doom and disaster if we blacklist the IRGC. Their main argument seems to involve the possibility of the IRGC taking revenge by targeting U.S. interests and allies across the Middle East. In other words, they may commit terrorist attacks in the West so we'd better not list them as terrorists! What strangely seems to have been forgotten is the fact that the IRGC has for decades been carrying out terrorist attacks across the Middle East, including Syria, Iraq, Yemen and Lebanon.

The IRGC and the Quds Force, their organization responsible for extraterritorial operations, are behind most of the brutal Shi'ite militias rampaging through the predominantly Sunni provinces of Iraq, massacring families and leveling cities in the name of the war against the Islamic State. It is a great irony that Iran exploited the IS campaign as an opportunity to carry out their genocidal crusade against the Sunnis, at the same time fooling former U.S. President Barack Obama into regarding Iran as an ally, even coaxing the United States into providing vital air support. There are even disturbing reports that the Iranian-backed Popular Mobilization Units, dubbed as Iraq's version of the IRGC, have been surreptitiously providing arms to IS.

Over the past six years, the world has witnessed in horror how the Syrian dictator Bashar al-Assad has massacred his own people, while enjoying unlimited financial and military support from Iran. It was the Iranian regime's backing for Assad and for the former Iraqi Prime Minister Nouri al-Maliki, two corrupt dictators who repressed their own people and particularly the Sunni communities in those two countries, that resulted in the rise of IS in the region. Thanks to Tehran, IS grew and became a threat to the whole world, creating the largest refugee crisis in modern history.

The Iranian regime, its IRGC and Basij militias have attacked America and its allies for many decades. The Iranian mullahs began targeting U.S. interests in 1980, less than a year after they came to power, in 1980 by seizing 52 Americans in the U.S. Embassy in Tehran and holding them hostage for 444 days. While it is common knowledge that Lebanese Hezbollah is funded by Tehran, it should also be remembered that in 1983 Iran and Hezbollah masterminded and carried out a truck bombing that killed 240 U.S. Marines in Lebanon; the Islamic jihadist car bomb attack destroyed the U.S. Embassy in Beirut, leaving 63 dead, 17 of whom were Americans. The attack on the U.S. Embassy in Kuwait City left six dead, 13 days before Christmas that same year. In September 1984, Lebanese Hezbollah again staged a car bombing against the U.S. Embassy in Beirut, this time killing 24 people.

In June 1996, the Khobar Towers in Saudi Arabia were the target of a massive truck bombing using 5,000 pounds of explosives. Nineteen U.S. airmen lost their lives and many more were injured. Former FBI director Louis Freeh has repeatedly stated that investigations show Iran was behind this attack. In June 1998, Lebanese Hezbollah again attacked the U.S. Embassy in Beirut, this time firing rocket-propelled grenades. Fortunately, no one was killed.

Iran's campaign in Afghanistan and Iraq is well documented. Rep. Ed Royce, chairman of the U.S. House of Representatives Foreign Affairs Committee, said in a recent hearing that Iran is responsible for the death of more than 500 Americans. U.S. Vice President Mike Pence has stated that Iran is the main state sponsor of international terror.

Even Obama's controversial deal that many boasted would tame Iran's nuclear program has brought no such change. Iran's Jan. 29 ballistic missile test was a flagrant violation of the deal, prompting the Trump administration to reintroduce a series of tough sanctions, signaling an immediate step-change with Obama's appeasement policy. It now emerges, according to a shocking report first made public by The Washington Free Beacon, that the Obama administration gave unprecedented access to the White House for teams of known pro-Iran lobbyists.

For far too long, Iran and the IRGC have taken advantage of the West's appeasement policy, not only engulfing the entire Middle East in flames, but also oppressing the Iranian people through atrocious and repeated human rights violations. Blacklisting the IRGC is long overdue and will be a first and necessary step in actually curbing Iranian atrocities.