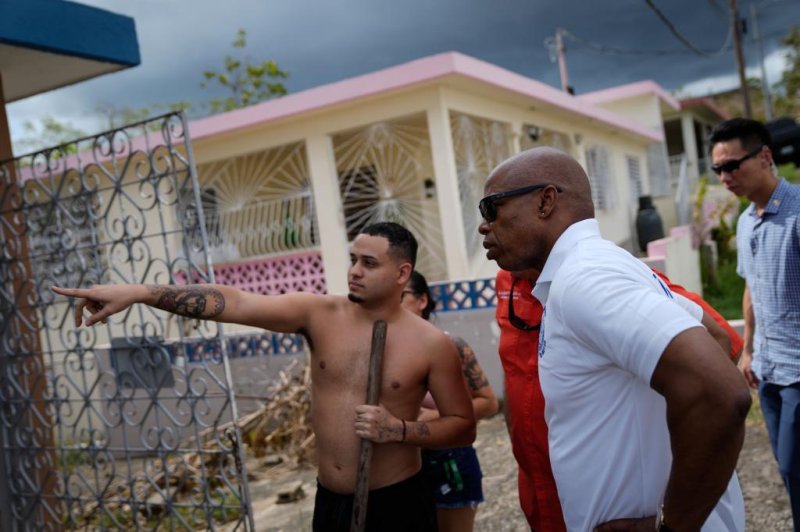 New York City Mayor Eric Adams visits with people in Puerto Rico on Sunday as more than 780,000 customers were without electricity a week after Hurricane Fiona battered the island. Photo courtesy of Eric Adams/Twitter

Sept. 25 (UPI) -- More than 780,000 people were without power in Puerto Rico on Sunday, a week after Hurricane Fiona battered the island, reminiscent of the aftermath of Maria in 2017.

Every customer in the western and southern parts of the island were without power Sunday, data from LUMA Energy provided by PowerOutage.us shows.

Around 60% of customers in central Puerto Rico were also without electricity Sunday, as well as around 10% of people in the northeast corner.

Data from the government of Puerto Rico's energy portal shows 820,000 customers have had their power restored in the past week after the entire island went dark.

"It's a disgrace that a week after this storm, which was strong and did its damage but was not Hurricane Maria, that we still don't fully have water," Vélez Lucian, a local community leader, told NBC News.

About 19% of Puerto Ricans remain without water service, according to the Puerto Rican government.

Business owners told NBC News they have not been able to reopen because of the lack of clean, running water.

"It's one week exactly that I can't open my business, where I can't make money, I can't pay my employees," said Yeliska Vargas, who owns a restaurant called La Bodeguita del Puerto in Cabo Rojo.

"They are also concerned about working in an area without power. We're in a very difficult situation."

Eric Adams, the mayor of New York City, visited Puerto Rico on Sunday to survey the damage and speak with local residents.

"We call Puerto Rico our sixth borough and we don't take that name lightly," Adams said on Twitter. "We're going to do the work on the ground to make our neighbors whole again."

Meanwhile, mayors in Puerto Rico have vented at LUMA Energy -- the company that provides power to the island -- about its speed in restoring electricity services.

"I'm fed up," Roldán Concepción, the mayor of Aguadilla, said on Facebook Live on Friday while announcing that the town hired engineers to erect poles and cables.

"By the time LUMA gets here, they will have zero excuses to not restore power."