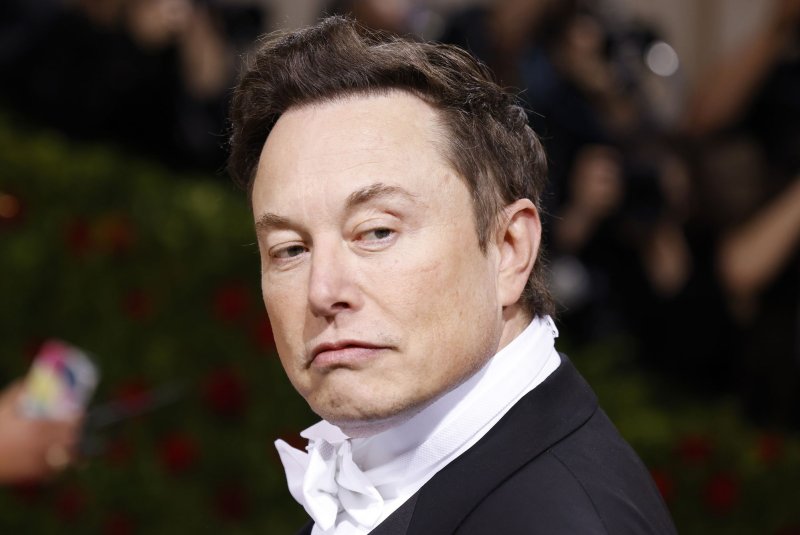 Tesla CEO Elon Musk has sold nearly 8 million shares of his company stock in recent days in transactions worth an estimated $6.88 billion, according to federal regulatory documents filed this week by the world’s richest man. Photo by John Angelillo/UPI | License Photo

Aug. 10 (UPI) -- Tesla CEO Elon Musk has sold nearly 8 million shares of his company stock in recent days in transactions worth an estimated $6.88 billion, according to federal regulatory disclosures filed this week by the world's richest man.

The move by Musk comes ahead of a legal battle with Twitter over the billionaire's unfulfilled promise to buy the company.

Musk made a final sale on the same day he filed papers with the Securities and Exchange Commission.

The billionaire has been steadily selling stock following an April 28 tweet in which he said "No further TSLA sales planned after today."

SEC filings that same week showed Musk had sold $8.4 billion in Tesla shares soon after he pledged to buy Twitter for $44 billion.

In July, Musk backed out of the deal, and Twitter sued, setting up a five-day trial that will head to court in October.

News of the most recent stock sale led some of Musk's Twitter fans to seek insight, with one tagging the CEO in a post asking if the billionaire was "done selling," and Musk responded, "Yes."

"In the (hopefully unlikely) event that Twitter forces this deal to close *and* some equity partners don't come through, it is important to avoid an emergency sale of Tesla stock," Musks replied in a tweet at 10:53 p.m. Tuesday.

He did not offer any specifics.

RELATED Tesla sold $936M of its bitcoin holdings in Q2

Several months ago, Musk was known to have financial backing stemming from as many as 19 partnerships around the world involving venture capital and cryptocurrency.

Musk recently said he would buy back some Tesla shares if he succeeds in nixing the deal with Twitter, and added he may even launch his own social media site called X.com.

U.S. News // 1 hour ago
Supreme Court declines to hear Mike Lindell's effort to escape Dominion case
Oct. 3 (UPI) -- The Supreme Court on Monday declined to hear an appeal from MyPillow CEO Mike Lindell in his attempt to throw out a defamation lawsuit filed by a voting company he accused of rigging the 2020 presidential election.

U.S. News // 2 hours ago
Same-sex wedding case among religious challenges on Supreme Court docket
Oct. 3 (UPI) -- The case of a graphic artist who argues she has a right to decline to design websites celebrating same-sex weddings because they are inconsistent with her religious beliefs is scheduled to be heard at the Supreme Court.

U.S. News // 6 hours ago
Joe Biden to view hurricane damage in Puerto Rico, then Florida
Oct. 3 (UPI) -- President Joe Biden will travel to Puerto Rico on Monday and Florida on Wednesday to view the damage done by Hurricanes Fiona and Ian.

U.S. News // 10 hours ago
Police: 1 Florida teen killed, 2 seriously injured in crash of stolen car
Oct. 3 (UPI) -- A Florida teenager was killed and two others were hospitalized with serious injuries after crashing an allegedly stolen car while attempting to flee police.

U.S. News // 12 hours ago
Man dies after escalator fall at Steelers' game
Oct. 3 (UPI) -- Authorities said a man died after falling down an escalator inside the Acrisure Stadium following the Pittsburg Steelers' 24-20 home loss to the New York Jets.
Advertisement