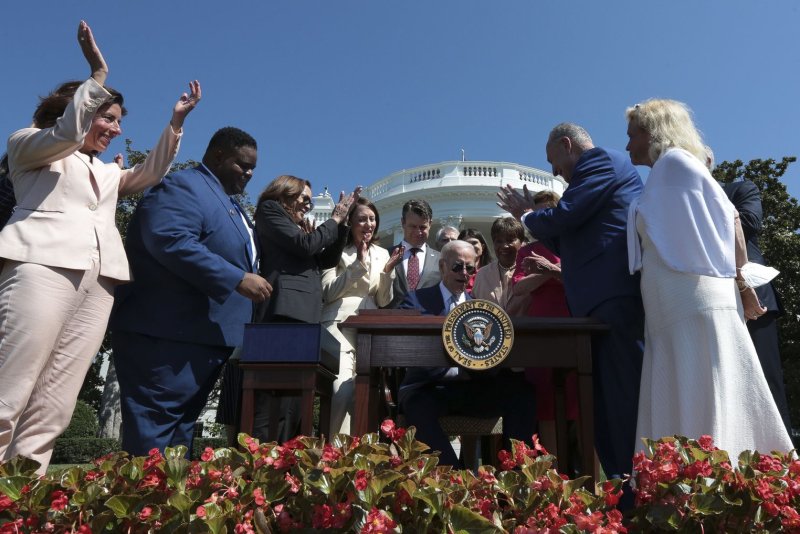 President Joe Biden (C) signs into law H.R. 4346, the CHIPS and Science Act of 2022 on the South Lawn of the White House in Washington, D.C. on Tuesday. Photo by Oliver Contreras/UPI | License Photo

Aug. 9 (UPI) -- President Joe Biden on Tuesday signed the CHIPS and Science Act into law, a bill that aims energize the domestic manufacturing of semiconductor chips and other technologies critical to many U.S.-based supply chains.

The COVID-19 pandemic exposed weaknesses in manufacturing and supply chains due to their dependence on foreign chips.

Biden signed the bill during a ceremony on the South Lawn of the White House.

"In America, everything is possible," Biden said in his speech. "We can channel all of our resources. We can channel the good talents of all our people."

"We haven't always gotten it right, but we have never walked away," he added.

The White House said the bill will lower the cost of everyday goods, strengthen American manufacturing and innovation and bolster economic and national security. Officials added that the bill will boost U.S. semiconductor research, development and production.

"America invented the semiconductor, but today produces about 10% of the world's supply and none of the most advanced chips," the White House said in a statement. "Instead, we rely on East Asia for 75% of global production."

Since Congress passed the bill, tech companies have announced nearly $50 billion in additional investments in U.S. semiconductor manufacturing. The White House said every region of the country will benefit from the new law.

Tuesday's remarks came after Biden was cleared following his second COVID-19 infection, but he coughed several times in his speech, indicating that the virus might not completely be out of his system yet.

"Decades from now, people will look back at this week with all we have passed and all we have moved on [and say] that we met the moment at this inflection point in history," Biden said. "I promise you, we're leading the world again for the next decades."

Later Tuesday, Biden will also sign the Instruments of Ratification for the Accession Protocols to the North Atlantic Treaty for Finland and Sweden. The document submits formal U.S. approval in adding the Scandinavian countries to NATO.

U.S. News // 15 hours ago
Florida begins rescue and recovery a day after Hurricane Ian's strike
Sept. 30 (UPI) -- Florida residents have begun the monumental task of cleaning up as the devastation left by Hurricane Ian came into focus a day after the storm slammed into the Gulf Coast and decimated large swaths of the state.

U.S. News // 8 hours ago
EPA announces cleanup of Montana Superfund site
Sept. 30 (UPI) -- The Atlantic Richfield Company has agreed to complete its cleanup of the Anaconda Smelter Superfund Site in Montana, which has suffered from severe pollution and water contamination.

U.S. News // 9 hours ago
Legionella forces personnel out of military barracks in San Antonio
Sept. 30 (UPI) -- About 150 personnel at an air force base in San Antonio are being moved due to an outbreak of Legionella, a bacteria known to cause a serious type of pneumonia called Legionnaire's Disease.

U.S. News // 9 hours ago
Navy sailor found not guilty of setting fire that destroyed ship
Sept. 30 (UPI) -- A sailor accused by the Navy of setting fire to and destroying a warship was acquitted Friday by a military judge.